TinyMart is sharing this content, the original was posted on salon.com by Amanda Marcotte, Published March 29, 2022 1:08PM (EDT) So please click here to go there
.

Having conquered the Supreme Court, the GOP take aim at same-sex marriage, anti-discrimination laws, and even Pride 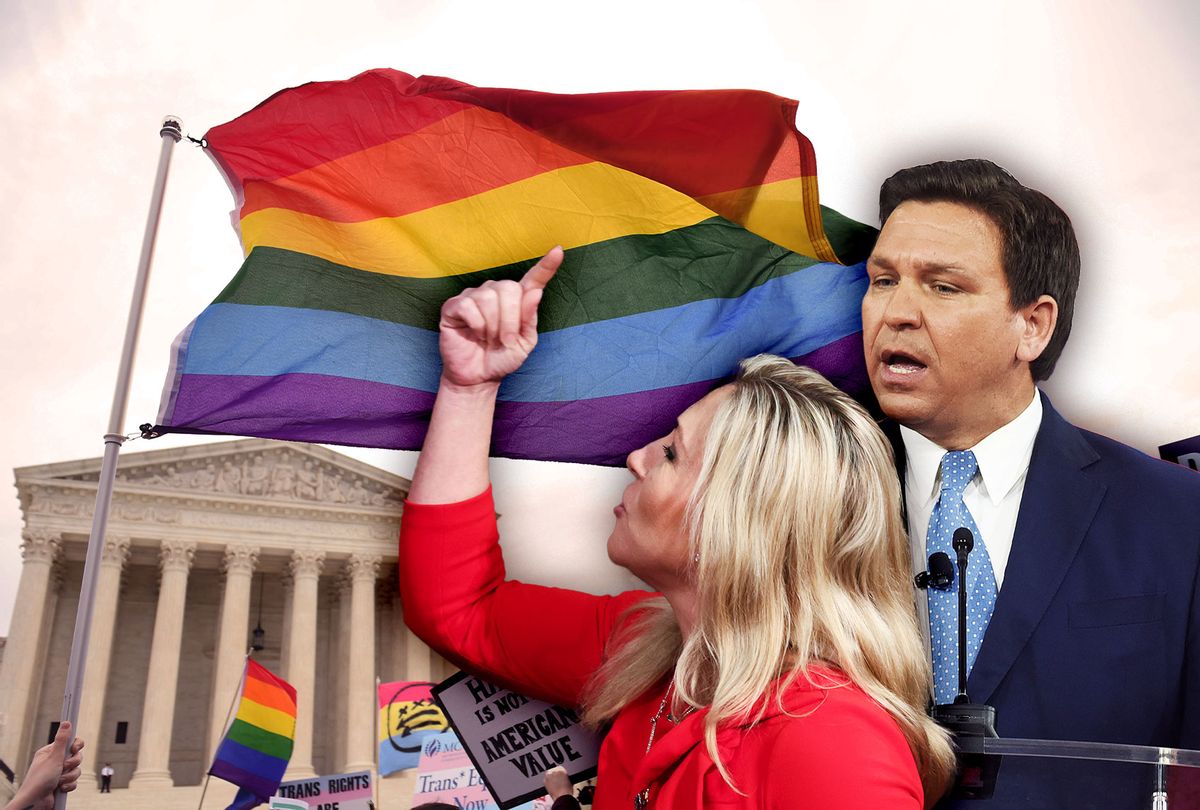 Proponents of the law continue to pretend that its limitations are narrow and only prohibit "teaching" young kids about sexuality. In reality, however, the bill is so broad and vague that it will likely be used to bully teachers and students from being out or acknowledging the existence of LGBTQ people. Contrary to claims that the law "only" impacts the lower elementary grades, as Mark Joseph Stern at Slate points out, it's worded in such a way as to allow parents to sue high school teachers for, say, allowing students to form a Gay-Straight Alliance. Indeed, the impetus of the law was a case where parents wanted to sue the school for accepting a teenager's gender identity.

Meanwhile, the mainstream press is still hamstrung by this fantasy that the courts will swoop in and stop this.

RELATED: I was one of the lawyers who helped win marriage equality. And yes, the GOP can take it away

In an opinion piece for NBC News, NYU law professor Daniel Putnam respondedto the law's passage with a piece confidently asserting that the law is unconstitutional because "courts have consistently recognized that LGBTQ students and teachers have a basic First Amendment right to express who they are."

It's a nice idea in theory. Unfortunately, the Supreme Court has been captured by far-right ideologues who have no respect for the Constitution, the rule of law, or precedent.

There's currently a sitting justice whose wife was involved in a fascist coup attempt — and that's just the tip of the corruption iceberg. The Republican-appointed majority routinely ignores the plain letter of the law when imposing their right-wing ideology, such as in recent cases throwing out vaccine mandatesand tearing up basic voting rights protections. The court recently signed off on a Texas law that bans abortion in direct violation of Roe v. Wade by pretending that they had no authority to block the "bounty hunter" provision that is being used to enforce the ban. Guess what? The Florida law uses the same provision to enforce the "don't say gay" bill by empowering parents to sue schools that allow LGBTQ staff and students to be out.

The right-wing court's total power and utter impunity is, in fact, empowering Republicans to expand their war on LGBTQ rights. And the "don't say gay" bill is likely just the beginning.

Recent events show that, in addition to the ongoing war on trans people, Republicans are deeply interested in rolling back hard-won gay rights victories from recent years, including same-sex marriage.

Rep. Marjorie Taylor Greene of Georgia tipped her hand to this at a recent Donald Trump rally in Georgia, in which she bellowed that Transportation Secretary Pete Buttigieg "and his husband can stay out of our girls' bathrooms." This statement led observers to wonder if she was confused about which unhinged right-wing conspiracy theory is which. The "predators in women's rooms" accusation is typically used these days to demonize trans women. But of course, Greene doesn't actually believe gay men are scheming for ways to rape women. As Aaron Rupar of Public Notice wrote, by mixing up her conspiracy theories, Greene was signaling that "all the GOP talk about bathrooms was really just euphemized bigotry" that doesn't need to make sense, even in their own lurid fantasies. Bathroom talk is just a new way of calling someone the F-word.

It also, importantly, functions as a signal that it's not just trans rights that they're coming for, but gay rights as well.

Greene has previously expressed a belief that violence is an appropriate response to feeling threatened by the existence of LGBTQ people. In light of that, her recent speech should be understood as a winking endorsement of gay-bashing. Nor is she an outlier.

Republicans successfully distracted the mainstream media from it with the bizarre QAnon antics, but a huge focus of GOP rhetoric during the Supreme Court confirmation hearings for Ketanji Brown Jackson last week were focused on overturning Obergefell v. Hodges, the 2015 Supreme Court decision that legalized same-sex marriage. Multiple Republicans on the Senate Judiciary Committee, but especially Sen. John Cornyn of Texas, asked Jackson a series of leading questions that were about signaling to their religious right base that they are exploring legal avenues to overturn that decision and invalidate same-sex marriages. That Cornyn took the lead is no surprise, as he's the same senator whose prepared remarks before the Heritage Foundation in 2004 compared same-sex marriage to marrying a "box turtle." He and his staff has spent the past 18 years trying to intimidate reporters out of recounting that fact, by noting that he dropped the line when he read the speech out loud. There can be little doubt he meant it, however, as he also supported bills meant to ban same-sex marriage. And, of course, he just used Jackson's hearing to compare Obergefell to the infamous 1857 Supreme Court decision that upheld chattel slavery. So, no, he hasn't evolved on his homophobic opinion, even if he tries to be coy about it.

Obergefell was a 5-4 decision in favor of gay rights. Since then, two of the justices who supported it have been replaced by Federalist Society-linked justices, who were picked in no small part to issue anti-LGBTQ decisions. For those who are counting, that means that if Republicans can find some way to relitigate the question, they likely have a 5-4 majority to overturn the legalization of same-sex marriage, or at least gut it significantly.

In Texas, meanwhile, Republicans like Gov. Greg Abbott and Attorney General Ken Paxton have been waging an all-out war to block trans rights, by banning kids from getting gender-affirming health care and even sending Child Protective Services against parents who accept trans children's identities. They're also sending signals that they feel confident they can expand this war to the LG and B folks, as well. In response to the Austin Independent School District holding a Pride Week, Paxton sent a threatening letter accusing the school of "cynically pushing a week-long indoctrination of your students" and breaking the law with an "instructional effort in human sexuality without parental consent."

Needless to say, none of the events in question constitute sex education, especially of the how-to instruction that Paxton is implying is going on. (And let's face it, teenagers already know the how-to part.) Events are based around themes like "Differences are Awesome" and "Creative Expression." Paxton's letter is riffing on the Republican fallacy that behaviors most people see as banal with regards to straight people — such as having a prom date or attending a wedding — become "sexual" when it involves LGBTQ people. By sending this letter, Paxton is attempting to achieve the same ends as the "don't say gay" law in Florida: bullying schools from allowing LGBTQ students to be out. He just isn't even bothering to go through the legislature first.

So while there has been, rightfully, a great deal of attention paid in recent years to how Republicans have "turned to" attacks on trans people, having lost the gay rights battle, these moves by Republicans show that they don't, in fact, feel that their loss on gay rights is permanent. On the contrary, there's a new escalation of attacks against gay rights that most Americans assume are inviolable The right to be out, the right to get married, the right to live your life safe from violence and discrimination are now all at risk. Florida's bill is just the beginning.