TinyMart is sharing this content, the original was posted on lgbtqnation.com by  Daniel Villarreal Thursday, June 30, 2022, So please click here to go there
.

School district lawyers are telling teacher to never to wear rainbows and to scrape off any "safe-space" stickers they have on classroom doors. 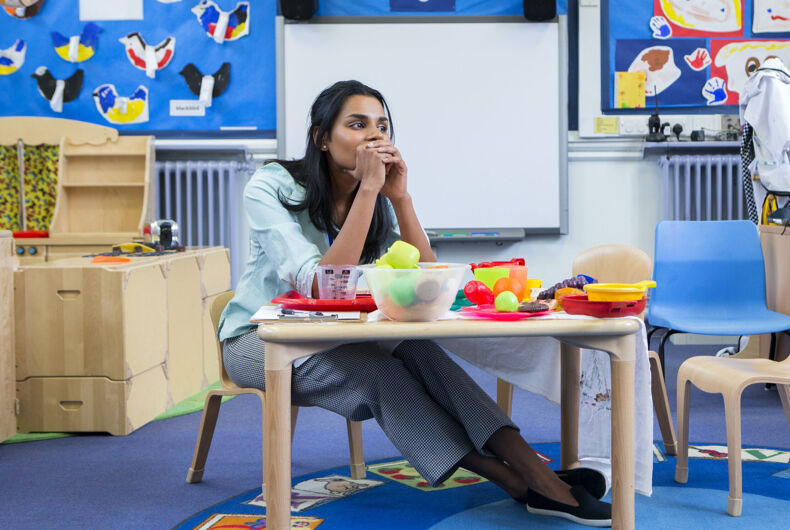 Teachers in Orange County Public Schools (OCPS) say that they’re being told not to display pictures of their same-sex spouses, not to wear rainbows, and to remove safe-space stickers from their classroom doors in order to avoid violating Florida’s broadly written “Don’t Say Gay” law.

These suggestions were made by OCPS attorneys to administrators in closed-door seminars earlier this summer. The seminars covered “what behaviors would and would not be legal under the law,” representatives of the county’s teacher association told WFTV.

Officially known as the Parental Rights in Education Bill, the “Don’t Say Gay” law says teachers cannot “encourage classroom discussion about sexual orientation or gender identity in primary grade levels or in a manner that is not age-appropriate or developmentally appropriate for students.” The law allows parents to sue their children’s schools if they mention LGBTQ issues in the classroom.

As a result, OCPS principals are suggesting that teachers not even mention their same-sex spouses if schoolchildren ask about them. Teachers will also have to tell parents if a student “comes out” to them. Furthermore, teachers must use the pronouns associated with the sex students were assigned at birth, regardless of even what their parents want, the Orange County Classroom Teachers Association (CTA) told the publication.

An OCPS representative said that the recommendations made to administrators during the seminars were “hypothetical scenarios based upon the new statutes and verbal answers were provided based on the limited guidance from the Florida Department of Education.” The representative added that the state education department will soon “provide formal guidance to administrators and staff” on how to best to follow the law.

An unnamed OCPS official told the news station that the recommendations were so strict in order to ensure that the law wasn’t broken. If any student or parent suspects a teacher of discussing LGBTQ issues in the classroom, teachers could have their teaching licenses revoked.

At least 20 states have introduced “Don’t Say Gay” bills this year, according to PBS. Supporters of the bills have accused LGBTQ teachers and allies of “grooming” and indoctrinating children for pedophilic rape.

But the OCPS’s approach shows the law’s true effects: harassing and silencing LGBTQ people in schools, causing LGBTQ educators to quit, and leaving LGBTQ children to experience greater rates of isolation, distress, and suicide as they feel unsupported and are painted as possible sexual predators.