Evelyn Rios Stafford made trans history in Arkansas. She’s not finished yet.

TinyMart is sharing this content, the original was posted on lgbtqnation.com  by  Greg Owen Friday, September 23, 2022, So please click here to go there
.

The Fayetteville Justice of the Peace fought an anti-trans bill and was the first transgender person ever to hold elected office in the state. 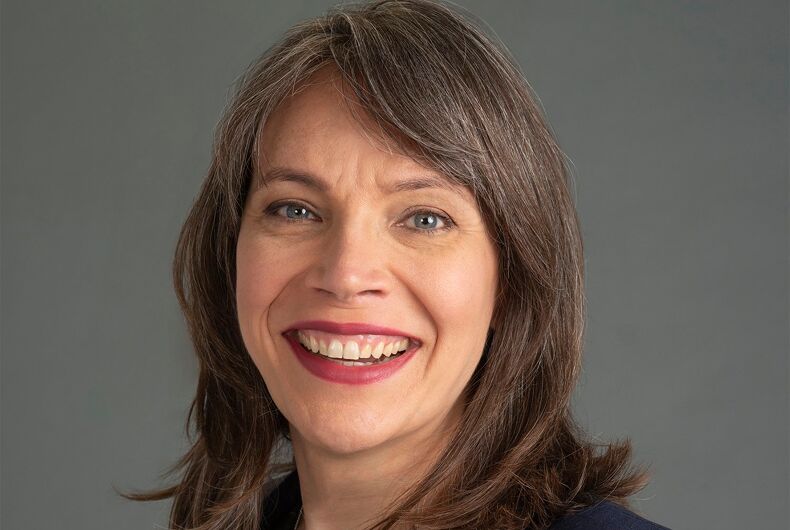 In just a few short years in politics, Evelyn Rios Stafford has managed to make an impression at the highest levels of government, and at the most local, too.

The first transgender person to hold elected office in Arkansas, Rios Stafford serves as Justice of the Peace for her small district in Fayetteville. In her role, she’s officiated dozens of weddings for constituents. “That’s one of the highlights of this gig as Justice of the Peace. It always gives me such a warm fuzzy feeling to do that for people,” she told LGBTQ Nation.

Now, Rios Stafford is running for reelection to the post without serious opposition, a vote of confidence even before the election that constituents view her time in office as effective.

Rios Stafford’s first political involvement was getting a local civil rights ordinance passed in the late 2010’s. In 2020, she ran for an open seat on the local Quorum Court, the equivalent of a board of supervisors, and won. She represents about 16,000 people in her district.

At 49, with a broad smile and the easy, thoughtful cadence of a Texas native, Rios Stafford says being trans wasn’t a focus of her first campaign. “You know, I made one post…about it on National Coming Out Day during the campaign. But that was about it.” It wasn’t until after she was elected that “some folks got wind of the fact that I was a first of something.”

But her victory would become pivotal in the fight over trans rights in the state.

In 2021, the Arkansas legislature passed HB1570, also known as the Save Adolescents from Experimentation or SAFE Act. Like similar legislation introduced in other red states, the bill would ban all gender-affirming care for minors, prohibit insurance from covering gender transition procedures, and criminalize those assisting minors in the process.

The bill was awaiting Republican Governor Asa Hutchinson’s signature when Rios Stafford was enlisted by an Arkansas legislator to help halt the bill’s march into law. From the “phone call to me to meeting the governor was probably, I’d say 24 hours.”

While Rios Stafford was trans, she hadn’t transitioned as a youth. “I knew that I needed to also make space for folks who had this experience and were directly impacted, because their voices are really the ones that have been left out of this whole thing,” she said. Rios Stafford brought 18 year-old Willow Breshears, who began transitioning at 16 with her family’s active support, to the ornate conference room table for her meeting with the governor.

“This was probably the first time that he had ever had a sit down, face-to-face discussion with a trans person before, or in this case two trans people. And, you know, he was kind of starting at zero in terms of knowledge.” A 15-minute appointment turned into half an hour and then 45 minutes. “He was just wanting to know more, basically.”

“I was on pins and needles walking out of that room, like, you know, almost on the verge of having a panic attack. I was replaying all of my answers in my head, like, did I say the right thing, did I screw this up completely?”

Not only did Hutchinson veto the bill, he wrote a Washington Post op-ed explaining why and also went on Tucker Carlson’s show to defend his decision. No matter, the Arkansas legislature overrode his veto, though the law remains tied up in court challenges.

Still, Rios Stafford was satisfied to hear “echoes of some of the things we talked about” in Hutchinson’s defense of the veto.

“‘Traditionally, Republicans have held themselves up as champions of limited government,'” Rios Stafford told the governor. “‘In what way, shape or form is this limited government? Because this is big government. This is government getting in between the families and their doctors.'”

Rios Stafford’s own gender awakening was pivotal to her work in her adopted home state. She majored in English at Rice University in Houston and was pursuing a career in journalism when she got a call from the ABC-TV affiliate in San Francisco asking her to come in for an interview. She got the job. She was young and bright and on the loose in Baghdad by the Bay.

“It was a great time to come there,” she recalled. “During the dot-com boom, the city was kind of going crazy, and it was a really fun time to be there in my 20s. And obviously San Francisco is a place where you can really explore your identity, as well.”

Born and raised in the Oak Cliff neighborhood of Dallas, she grew up attending Catholic school, where she encountered the first signs of her conflicted gender identity.

“In Catholic school, I had a boyfriend when I was 15. A couple of our friends knew about it, but it definitely wasn’t something that we were out about. I knew that I wasn’t straight, exactly,” she remembers thinking, “but I didn’t really have the language or knowledge to have an understanding of exactly in what way.”

In college, she figured it out. It was “literally, when I was, like, doing research in the college library, that I came across the idea of transgender. And it was this lightbulb moment of like, ‘Oh my gosh, that’s what’s been going on with me.'”

In San Francisco, she embraced her new reality. “Gradually, I became more and more out,” Rios Stafford recalled. “It was not a surprise for some people. It was a surprise for others.” While she was “bracing for the worst,” she was “really pleasantly surprised and so grateful for having such a positive experience.”

“Back then, this was sort of like, this was new territory,” she said. “I think I was the first employee at an ABC owned-and-operated station to transition on the job.” The following year, Rios Stafford picked up two Emmys for her producing. “I feel like it was all tied together.”

The total package arrived shortly after she transitioned, when Rios Stafford met her future husband, Bob Stafford, an artist and graphic designer, online. She was “smitten from the beginning.” The two shared mutual friends in the arts scene South of Market in San Francisco, and Southern roots, as well. Soon after, the couple moved east to Stafford’s hometown of Fayetteville. They were married in 2016.

According to Rios Stafford, performing weddings in her job as Justice of the Peace is optional. “Not all the JPs do it. I have a feeling that one or two of them might not be on there because if they were on the list, they might have to do a same-sex wedding, and it’s against their personal beliefs or something? But I was like, ‘Sign me up! I’ll do anybody.'”