TinyMart is sharing this content, the original was posted on awfulannouncing.com by  Brandon Contes on 03/18/2022 So please click here to go there
. 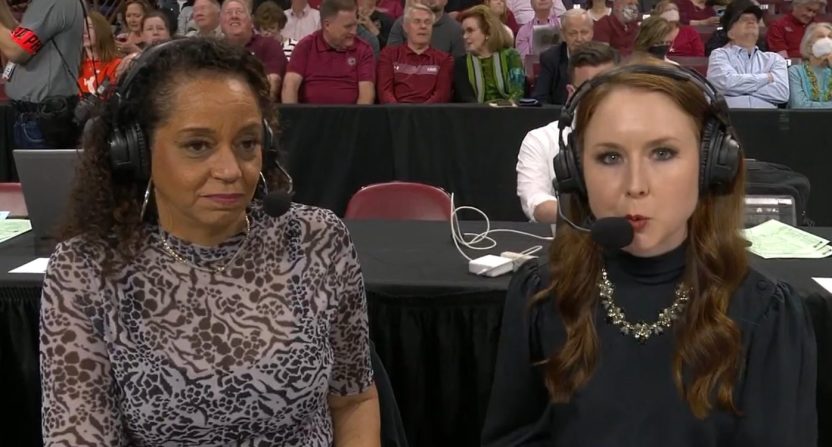 Friday afternoon, during ESPN’s coverage of the 2022 NCAA Women’s Tournament, Lyle and Peck protested the legislation by going silent to begin the second half of the matchup between South Carolina and Howard University.

“There are things bigger than basketball that need to be addressed at this time,” Lyle said before the start of the second half. “Our friends, our family, our coworkers, the players and coaches in this community are hurting right now. About eight minutes ago, our LGBTQIA+ asked for our solidarity and support including our company’s support in opposition to the Parental Rights in Education bill in the state of Florida.”

“A threat to any human rights is a threat to all human rights,” Peck added before informing the audience they would be taking a pause during the broadcast.

Lyle and Peck remained silent for the first two minutes of the third quarter. Upon returning to call the action around the eight-minute mark, Lyle broke the silence by saying “we love our teammates, we support our teammates, and we are one.”

“To be honest with you, we thought we were going to come here today and really celebrate a sport that has meant so much and done so much including for so many in the LGBTQIA+ communities, but we understand the gravity of this legislation,” said Duncan. “And because of that, our allyship is going to take a front seat.”

Their efforts were echoed and praised by many on social media, including ESPN journalist Katie Barnes.

The Parental Rights in Education bill, which critics refer to as the “Don’t Say Gay” bill attempts to ban “classroom instruction by school personnel or third parties on sexual orientation or gender identity” in grades kindergarten through third grade. Critics point to terminology in the bill which also bans such classroom instruction “in a manner that is not age appropriate or developmentally appropriate for students,” claiming it could extend to all grades.

In response to the legislation, Disney employees planned scheduled walkouts to protest the bill this week, with a full-scale walkout scheduled for Tuesday March 22. Disney is the parent company of ESPN.