Disney, DeSantis and the "Don't Say Gay" bill: A Florida showdown over money, power and equality

TinyMart is sharing this content, the original was posted on Salon by

Disney CEO Bob Chapek spoke out against the law after initial silence. Now DeSantis is slamming Disney as "woke" 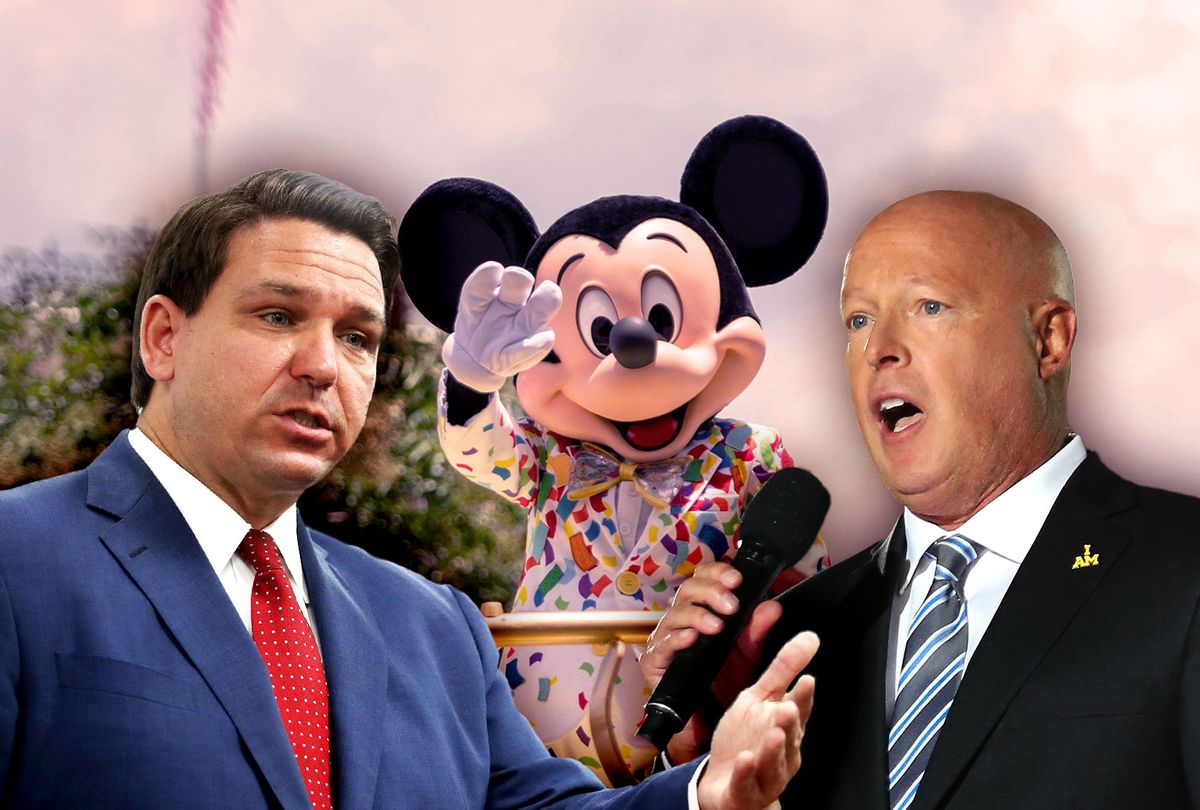 Over the past several decades, the Walt Disney Company, the corporate goliath whose holdings extend beyond its eponymous brands to almost every corner of the entertainment industry, has managed to keep a relatively low profile in Florida state politics, quietly lobbying and funneling money toward business-friendly politicians on both sides of the aisle. But now, with Florida on the precipice of enacting one of the most regressive pieces of anti-LGBTQ+ legislation in recent history, critics called out Disney for enabling the measure's passage, demanding that the company speak out before Governor Ron DeSantis signs it into law.

The backlash started last week with the Florida Senate's passage of H.B. 1557, colloquially dubbed by critics as the "Don't Say Gay" bill. The measure prohibitsteachers from "discussion" and "instruction" on "sexual orientation or gender identity," a broad mandate that can suppress even mentions of same-sex parents when discussing the basics of family life. It also establishes a cause of action for parents to sue — and collect compensation from — school districts whose employees break the law, ostensibly offloading the responsibility of enforcement to aggrieved parents.

During the lead-up to H.B. 1557's passage, critics of the bill called on Disney to condemn the measure in hopes that the company's immense business presence in the state could be used to sway the legislature. And yet the company stayed mum on the topic for several days, with CEO Bob Chapek claiming he didn't want Disney to "become a political football in any debate."

On Monday, after days of internal and external pressure, Chapek apologized for the company's delayed response to "Don't Say Gay," revealing that he was "opposed to the bill from the outset."

"It is clear that this is not just an issue about a bill in Florida, but instead yet another challenge to basic human rights," Chapek said in an internal memo, reported by Variety. "You needed me to be a stronger ally in the fight for equal rights and I let you down. I am sorry."

Immediately after ​​Chapek rebuked "Don't Say Gay," which DeSantis has indicated he will sign, the governor lambasted Disney as a "woke" corporation failing to live up to its kid-friendly values.

"When you have companies that have made a fortune off being family friendly and catering to families and young kids, they should understand that parents of young kids do not want this injected into their kids' kindergarten classroom," DeSantis said.

The governor also accused Disney of being in "far too deep with the communist party of China," suggesting that the company's business ties with China have voided its "moral authority to tell you what to do."

On top of condemning "Don't Say Gay," Chapek also pledged to donate $5 million to the Human Rights Campaign (HRC), an LGBTQ+ advocacy group, to express the corporation's "unwavering commitment to the LGBTQ+ community." But the HRC has thus far rejected the money. Interim president Joni Madison says she won't accept it until the company "build[s] on their public commitment and work with LGBTQ+ advocates to ensure that dangerous proposals … don't become dangerous laws."

For now, Disney has also suspended its political contributions in Florida — donations that H.B. 1557's most ardent backers had benefited from in recent years.

Over the last two years alone, Disney has donated nearly $300,000 to state supporters of the measure, according to Popular Information. The company specifically gave thousands to DeSantis ($50,000); state Rep. Joe Harding ($4,126), the bill's chief House sponsor; and state Sen. Dennis Baxley ($1,000), the bill's chief Senate sponsor. Disney also reportedly gave $913,000 to the Republican Party of Florida during the 2020 election cycle, according to Politico.

Chapek has suggested that Disney did not make these donations with the intent bolstering "Don't Say Gay," noting that the company contributed to Republicans and Democrats "who have subsequently taken positions on both sides of the legislation."

However, Florida Republicans had already been waging a years-long campaign to undermine LGBTQ+ rights when those donations were sent. In January 2019, for instance, DeSantis signed an anti-discrimination order for state employees that specifically excluded LGBTQ+ protections. And by March 2020, Florida Republicans were considering a broad-ranging measure, called the "Parents' Bill of Rights," that LGBTQ+ advocates feared would require school counselors to out gay or transgender students to their parents.

"If you look at Disney's fundraising over the past two election cycles — that includes 2022 and 2020 — 80% [goes] to Republicans or Republican-leaning political groups," Eskamani told Salon in an interview. "That's really important because it does dictate how much Disney has shifted towards a commitment to the majority party."

In the past, Eskamani noted, Disney has maintained a congenial relationship with Florida Republicans. Last April, DeSantis specifically exempted Disney from a law that would punish online platforms for suspending conservative politicians and outlets. And in November 2020, the governor praised Disney World for reopening after a months-long closure toward the beginning of the pandemic. It remains unclear how long that commitment will last as Disney continues to find itself in the crosshairs of public relations and politics.

DeSantis' counter-attack on Disney came as a surprise to some, given the company's role as an economic powerhouse in the Sunshine State.

Disney currently employs more than 77,000 people in Florida, where its expansive Walt Disney World theme parks play a major role in the tourism economy. According to the Orlando Business Journal, the Walt Disney World Resort is the largest employer in all of Central Florida, with twice as many workers on its payroll as Universal Orlando Resort. The company also owns more than two dozen resorts in Florida and charters four cruise ships along the state's eastern coastline. A company-sponsored study found in 2011 that Disney generated $18.2 billion a year in economic activity throughout Florida, a number that at the time represented roughly 2.5% of the state's entire GDP.

But over the past few years, Disney and other large corporations have not been spared attacks from both progressive and conservative sides in the ongoing culture war. As a result, many corporate leaders are beginning to re-examine the long-term implications of their political giving, said Bruce Freed, President for the Center for Political Accountability.

"Companies really have to take a look at the package of positions, the general tone, the direction in which a party is going," Freed told Salon in an interview. "Today, they have to approach political spending much more carefully and much more cautiously. And they really need to have policies on how they're going to handle their election-related spending."

Last April, after Georgia passed a sweeping restrictive voting bill, several Georgia-based companies like Coca-Cola, Delta Airlines, AT&T and Home Depot were rebuked by voting rights advocates for contributing to the measure's backers. Corporate donors to police foundations faced similar backlash during the George Floyd protests in the summer of 2020, when racial justice advocates called on companies to condemn police violence and divest from law enforcement. Last year, Texas-based corporations like American Airlines and Dell Technologies were criticized for not speaking out against a recent state bill that equates gender-affirming healthcare for children to child abuse.

In Disney's case, Eskamani said, the company faces an especially acute PR challenge, in part because it's a very consumer-facing brand with a significant portion of LGBTQ+ employees and customers.

"These are these folks who love the brand — they feel like they can be themselves at Disney," Esamani said. "[Disney] also makes a lot of money off the LGBTQ+ community, whether it's Gay Days or celebrating Pride. They have staff focused on LGBTQ+ issues. Not every company has that."

But that type of imprimatur, employees say, makes Disney's response to "Don't Say Gay" all the more outrageous.

This month, a group of Disney employees are staging a rash of walkouts throughout the U.S, demanding that the company to "immediately and indefinitely" halt its campaign contributions to all of H.B. 1557's supporters.

"Our community will not sit silently while TWDC fails in its obligations to advocate for employees it claims to support with 'unwavering commitment,' profits off our labor, and boasts of record profits it has used to fund politicians who legislate unsafe schools for our youth," the group wrote in a letter. "As a community, we have been forced into an impossible and unsustainable position and must now take action to convince TWDC to protect employees and their families in the face of such open and unapologetic bigotry."

Disney did not respond to Salon's request for a comment.