TinyMart is sharing this content, the original was posted on lgbtqnation.com by ﻿ Alex Bollinger Friday, July 29, 2022, So please click here to go there
.

Brushing off the inevitable lawsuits as the "natural consequences" of his position, Jake Oaks says that the Constitution requires county clerks to ignore the constitutional rights of LGBTQ people. 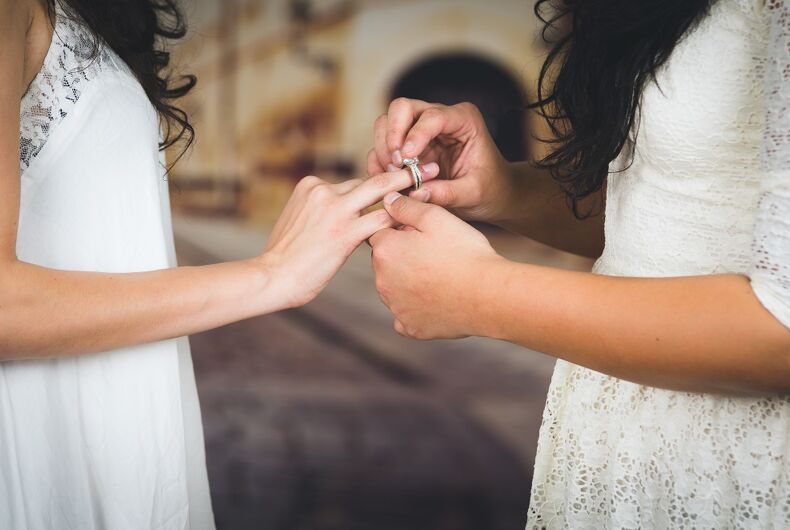 Jake Oaks is running for county clerk in Utah County, and he’s promising to deny same-sex couples marriage licenses if he gets elected. The area is Utah’s second-most populous county, encompassing Provo; it is south of Salt Lake City.

Oaks, who is running with the Independent American Party against Republican Aaron Davidson in November (there is no Democrat in the race), says that his understanding of constitutional law would prohibit him from respecting equal rights for same-sex couples.

His argument is that the state of Utah passed a constitutional amendment banning same-sex marriage in 2004. A federal court overturned that ban in 2013, saying that it violated the due process and equal protection guarantees of the U.S. Constitution, and the Supreme Court refused to hear the state’s appeal.

Two years later, the Supreme Court legalized marriage equality across the country in the historic Obergefell v. Hodges decision. States respected that decision because of the Supremacy Clause, which says that federal law takes precedence over state law.

Oaks – who describes himself as self-taught when it comes to constitutional law – says that doesn’t apply to marriage rights since marriage isn’t spelled out in the Constitution, and the Tenth Amendment means that states are in charge of regulating marriage.

When asked about the 14th Amendment, which says that states can’t deny any person liberty without due process, Oaks said that it’s a “stretch” to say that that applies to marriage rights.

“If you’re going to stretch it that way, then somebody could say the 14th Amendment would allow them to do anything they please in society because it’s their right to pursue what they want,” he said, echoing anti-LGBTQ advocates’ old argument that allowing LGBTQ people to live their lives freely will lead to chaos.

The current Utah County clerk, Josh Daniels, said that county clerks have to respect federal law here and that failing to do so would lead to a lawsuit.

Oaks said he doesn’t care about the possibility of an expensive lawsuit.

“What comes afterward is of natural consequences, whatever may come. The question is whether I’m going to uphold my oath,” he said. “What is the Constitution if we don’t follow it?”

Utah County said that it issues about 50 marriage licenses a month to same-sex couples. Many of them don’t live in that county but still enjoy using its online system.

The Independent American Party is a rightwing third party with some support in mountain states. Founded in 1967, the party nominated former Alabama Gov. George Wallace as its first presidential nominee in 1968, and he ran on a platform of racial segregation.