TinyMart is sharing this content, the original was posted on lgbtqnation.com by  Daniel Villarreal, Tuesday, June 28, 2022, So please click here to go there
. 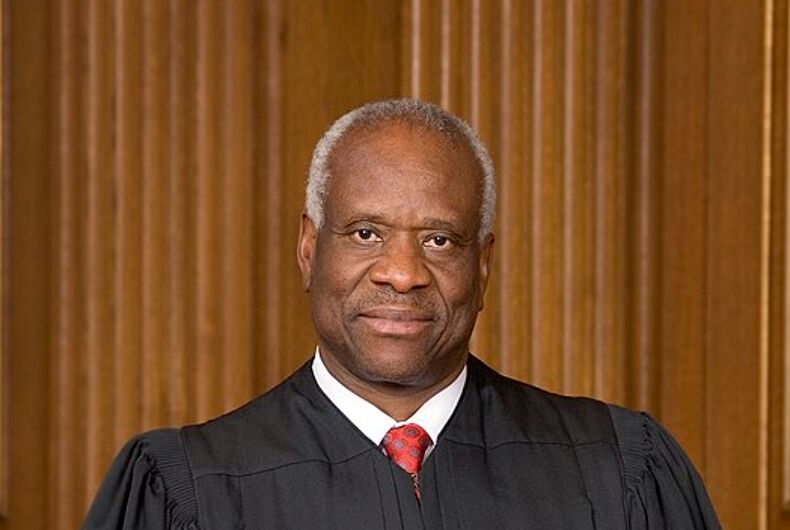 Supreme Court Justice Clarence Thomas has expressed interest in loosening libel and defamation laws to allow an anti-LGBTQ hate church to sue an organization that called them out as a hate group.

Thomas, who supports ending same-sex marriage in the U.S., expressed this interest in his recent dissent disagreeing with the Supreme Court’s decision not to hear the anti-LGBTQ church’s case.

He was the lone dissenter to comment on the court’s recent refusal to hear a lawsuit brought by D. James Kennedy Ministries, an evangelical Christian media company that operates the Florida-based Coral Ridge Ministries (CRM).

CRM sued the Southern Poverty Law Center (SLPC) for libelous defamation after SLPC listing CRM as a hate group. CRM said that in 2017, the online retailer Amazon cited the SLPC’s listing as a reason to block CRM from participating in its AmazonSmile program. The program lets Amazon users to donate to nonprofit organizations. (AmazonSmile has a history of allowing other anti-LGBTQ groups to fundraise through its platform.)

The SLPC noted that the church was founded by Rev. D. James Kennedy, a man who promoted the anti-gay works of R.J. Rushdoony, a man who supported the death penalty for homosexual “abominators.” Kennedy’s 1989 CRM newsletter included photos of kids along with the tagline, “Sex With Children? Homosexuals Say Yes!”

In 2009, CRM hired anti-gay activist Robert Knight as a senior writer. Knight has opposed letting “pansexual, cross-dressing” homosexuals serve openly in the military. Knight has written that gay marriage “entices children to experiment with homosexuality” and said that acceptance of homosexuality leads to “a loss of stability in communities, with a rise in crime, sexually transmitted diseases and other social pathologies. Still another is a shortage of employable, stable people,” the SLPC noted.

“We hold that the district court was correct in finding that Coral Ridge’s interpretation of Title II would violate the First Amendment by essentially forcing Amazon to donate to organizations it does not support,” the three-judge panel wrote in its decision.

The Supreme Court declined to hear CRM’s case on Monday. In his dissent, Thomas wrote that the SPLC “caused Coral Ridge concrete financial injury by excluding it from the AmazonSmile donation program.” He also said that the court should revisit the “actual malice” standard in libel cases established by the Supreme Court’s 1964 decision in New York Times v. Sullivan.

In that case, the then-Montgomery, Alabama Public Safety Commissioner L.B. Sullivan sued The New York Times for publishing an ad that had several factual inaccuracies about the local police. Since his post oversees police action, the ad defamed him by proxy, he argued.

The court ruled that the First Amendment allows newspapers to defame public officials, even with false statements, as long as they don’t act with “actual malice.” Actual malice was defined as making a false statement to deliberately harm another person or with reckless disregard for whether a statement is true or false.

The court’s ruling sets U.S. libel law from that of other countries, such as the United Kingdom. In the U.K., libel law requires that one must simply prove that a false statement has harmed one’s reputation, regardless of intent.

In his dissent, Thomas wrote, “This case is one of many showing how New York Times and its progeny have allowed media organizations and interest groups ‘to cast false aspersions on public figures with near impunity.’”

He said that the Supreme Court justices who decided the New York Times case issued “policy-driven decisions masquerading as constitutional law.” He added that the justices “never even inquired whether ‘the First or Fourteenth Amendment, as originally understood, encompasses an actual-malice standard.’”

Thomas’ willingness to weaken libel laws follows his stated wish to overturn previous Supreme Court decisions legalizing access to contraceptives and same-sex marriage rights as well as the 2003 ruling that struck down anti-sodomy laws as discriminatory against gay people.

In his footnote on the recent ruling overturning Roe v. Wade, Thomas wrote that the Supreme Court “erroneously” decided in the 1973 Roe v. Wade decision to treat abortion as a fundamental right that should be free from government interference, something known in legal terms as “substantive due process.”