TinyMart is sharing this content, the original was posted on lgbtqnation.com by ﻿ John Russell Thursday, September 22, 2022, So please click here to go there
.

Mpho Tutu van Furth's wife is speaking out about the injustice. 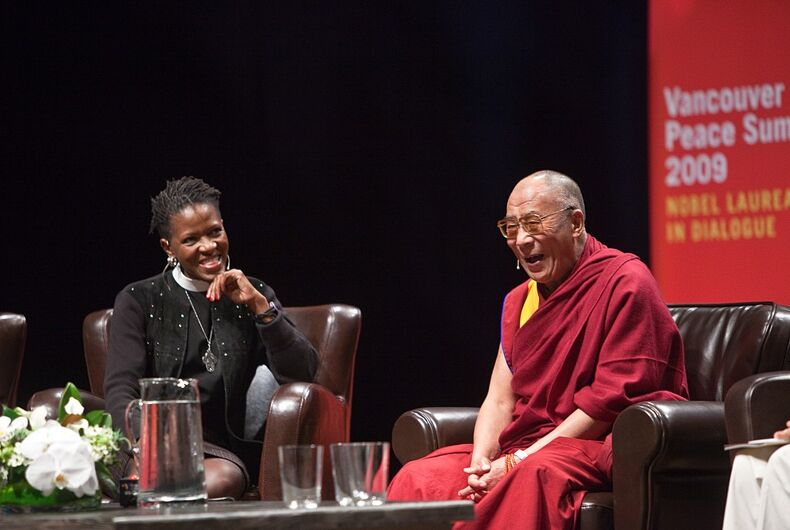 The Church of England has banned the lesbian daughter of the late Archbishop Desmond Tutu from presiding over the funeral of a close friend.

Mpho Tutu van Furth was ordained in 2003 but has been banned from functioning as an Anglican priest in her native South Africa since marrying her wife, Marceline Tutu van Furth, in 2015. The Church of England bans LGBTQ clergy from marrying same-sex partners, while other branches of the international Anglican Communion, like the U.S. Episcopal Church, allow it.

In an interview with VOA News, Marceline Tutu van Furth said that Mpho’s godfather Martin Kenyon had specifically requested that she preside over his funeral when the couple visited him in April. But following Kenyon’s death in London last week, the Church of England is refusing to allow Mpho to fulfill her godfather’s wishes.

“She had to hand in her license and now this is the second time that I’m aware of,” Marceline said. “Of course small things also happened, but that she can’t do something out of love for her godfather and for the family just because of the same-sex marriage and that’s something that upsets me.”

According to Marceline, Mpho will address mourners in Kenyon’s home garden this week rather than in church.

As Pink News notes, Mpho’s father, the late Nobel Peace Prize laureate Archbishop Desmond Tutu, was a supporter of LGBTQ rights. “I cannot keep quiet when people are penalized for something about which they can do nothing,” he said in a 2013 United Nations Free and Equal campaign video in which he decried discrimination on the basis of gender.

“But more perniciously, more ghastly, is the fact that people are penalized, killed, all sorts of ghastly things happen to them, simply, solely on the basis of their sexual orientation,” he continued. “I oppose such injustice with the same passion that I opposed apartheid.”

“My father campaigned for women’s ordination, and so every time I stand at the altar I know that this is part of his legacy,” Mpho told The Guardian in 2016 after being forced to give up her priest’s license. “And it is painful, a very odd pain, to step down, to step back from exercising my priestly ministry.”

Marceline Tutu van Furth said she is now taking inspiration from her late father-in-law’s legacy in speaking out. “The Tutu family always have action and I thought, now it’s my turn.”