Christian preacher calls for death to lesbians: “Putting a bullet in their head is too nice”

TinyMart is sharing this content, the original was posted on lgbtqnation.com by  Alex Bollinger Wednesday, June 15, 2022, So please click here to go there
.

"All the lesbos, all the dy**s, all these butch dy**s out there, they deserve the death penalty too." 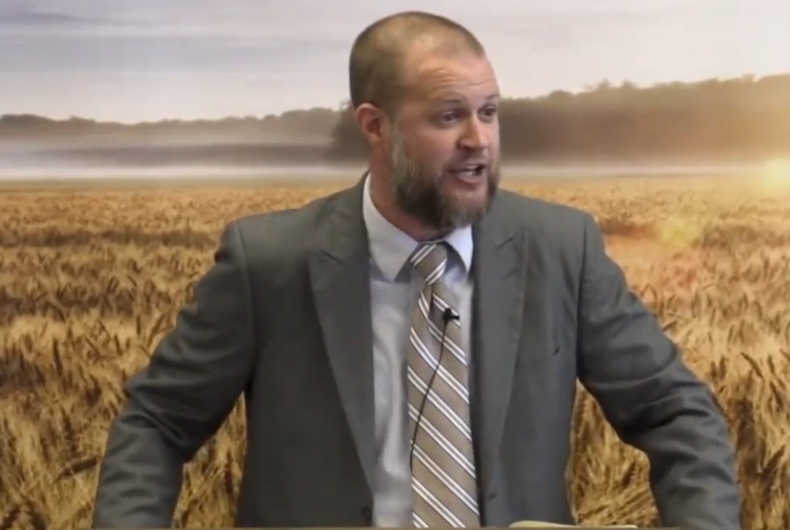 Brother Tanner Furrh of the Stedfast Baptist Church in Hurst, Texas called for death to lesbians during a sermon this weekend, saying that getting “a bullet in their head is too nice.”

“They’re sick and gross because the Bible says so,” Furrh said. “And not just the male fa***ts. Also the women-fa***ts too.”

Related: Christian pastor calls for every gay person to be lined up & “shot in the back of the head”

“All the lesbos, all the dy**s, all these butch dy**s out there, they deserve the death penalty too,” he continued. “It should be punished with death by the government.”

“Putting a bullet in their head is too nice,” Furrh said. “You know, the Bible said to stone ’em with stones. That’s a little bit harsher of a punishment. That punishment lasts a little bit longer than a bullet to the head. That’s the easy way out, honestly.”

Stedfast is one of the most hateful churches in the country, and its pastors have repeatedly called for death to LGBTQ people. Just last week preacher Dillon Awes said that all LGBTQ people “should be lined up against the wall and shot in the back of the head.”

“According to God we should hate Pride, not celebrate it,” Pastor Jonathan Shelley said several weeks ago at an Arlington, Texas city council meeting. “God has already ruled that murder, adultery, witchcraft, rape, bestiality, and homosexuality are crimes worthy of capital punishment.”

Shelley made headlines last year when he said that he was happy that a gay person was killed at a Pride event.

“The Bible says that they’re worthy of death!” he said at the time. “They say, ‘Are you sad when f**s die?’ No. I think it’s great! I hope they all die! I would love it if every f*g would die right now.”