TinyMart is sharing this content, the original was posted on lgbtqnation.com by  Greg Owen, Thursday, July 7, 2022, So please click here to go there
.

"Join us in California, where we still believe in freedom: freedom of speech, freedom to choose, freedom from hate and the freedom to love." 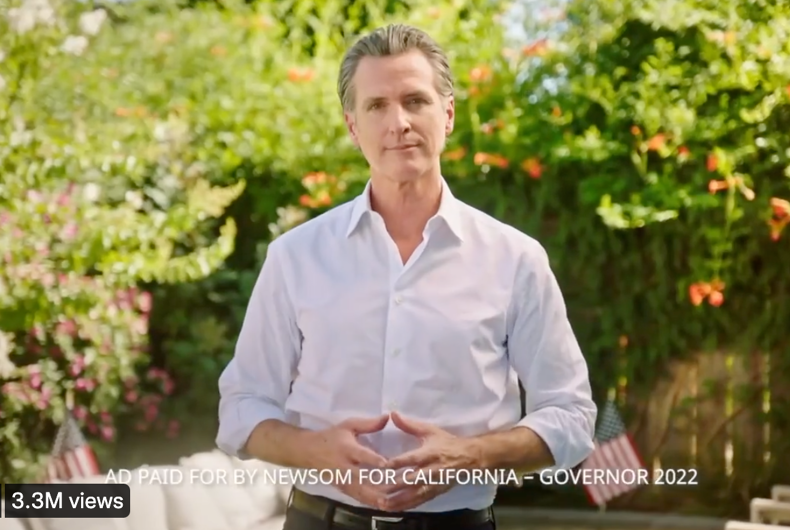 The 54 year-old first term governor, who forcefully beat back a recall effort last year, is running for another four-year stretch in Sacramento, but he’s airing ads in Sarasota — Florida, that is.

Newsom snatched up $105,000 worth of ad time on Fox affiliates around the Sunshine State starting July 4th, in a clear effort to pick a political fight with his Florida counterpart and ideological opposite, Republican Gov. Ron DeSantis (R).

Both men are presumed to be entertaining a run for president in 2024.

“Your Republican leaders: they’re banning books, making it harder to vote, restricting speech in classrooms, even criminalizing women and doctors.”

DeSantis, who is also up for reelection this year, led Florida’s culture warriors in those battles, most notoriously with the state’s “Don’t Say Gay” legislation, which just went into effect July 1.

A review by the Florida Department of Education, led by the governor, resulted in a ban of almost half of the state’s math books due to “prohibited topics.” DeSantis described language in the texts as “indoctrination.”

In April, DeSantis signed a bill banning abortion after 15 weeks, despite a 1980 amendment to the Florida Constitution by state voters to establish that “every natural person has the right to be let alone and free from governmental intrusion into his private life.” The 15-week ban is in effect while it moves through the courts.

Recently, DeSantis threatened parents with “laws against child endangerment” for exposing kids to anything DeSantis characterizes as age-inappropriate. 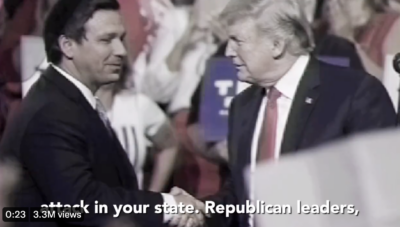 With Congress in gridlock and the Supreme Court abolishing nationwide constitutional protections, the battle for America’s hearts and minds is moving to the states — and even about moving from state to state.

“I urge all of you living in Florida to join the fight,” Newsom continues in the spot. “Or join us in California, where we still believe in freedom: freedom of speech, freedom to choose, freedom from hate and the freedom to love.”

“Don’t let them take your freedom.”

“Gavin Newsom might as well light a pile of cash on fire,” said DeSantis campaign spokesman Dave Abrams in response to the ad buy. “Pass the popcorn for his desperate attempt to win back the California refugees who fled the hellhole he created in his state to come to Florida.”

Newsom has been a staunch supporter of LGBTQ rights since his time as mayor of San Francisco, when he officiated some of the nation’s first same-sex weddings in the run up to the Supreme Court decision recognizing the unions nationwide. That ruling, in Obergefell v. Hodges, is under threat following the conservative-majority court’s decision overturning a woman’s right to choose abortion in Roe v. Wade.