Bisexual daughter cuts ties to her dad. He’s a GOP state senator who is “taking my rights” away

TinyMart is sharing this content, the original was posted on lgbtqnation.com by  Bil Browning, Friday, July 1, 2022, So please click here to go there
.

She put her father on blast in a TikTok video that shames him as abusive and homophobic. 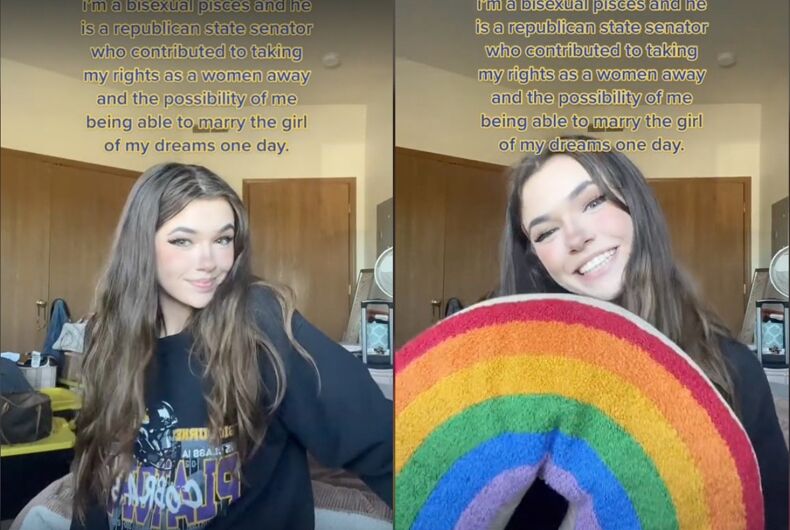 A TikToker has posted a video to announce that she has cut ties with her father.

She’s a bisexual woman and he’s a GOP state senator who has been part of an effort to overturn a woman’s right to choose.

Korynn Dickey posted the video on Wednesday, but didn’t specifically name her father.

“I had to cut my dad off,” the text overlay reads as she sways with a rainbow pillow. “See, I’m a bisexual Pisces and he is a republican state senator who contributed to taking my rights as a woman away and the possibility of me being able to marry the girl of my dreams one day.”

“Guess who!! clues are hidden in the video.”

Internet investigators quickly solved the puzzle, identifying her father as Iowa state senator Adrian Dickey. The TikToker seemed to confirm this in a followup video, pointing out that her father was one of the Republicans urging the state Supreme Court to overturn a court decision that abortion is a constitutional right in the state.

“Yes my dad didn’t vote on roe v wade but he did support this! That’s enough for me to finally cut him off and no longer claim him as a parent,” she wrote with the video.

In a separate video, she pointed out that he has had a role in the GOP effort to demonize and discriminate against transgender children who want to play school sports.

Dickey told the Daily Dot that she came out to her father as a bill was wending its way through the legislature to ban trans kids from sports teams under the guise of “protecting girls’ sports.” She said she made the decision because she “wasn’t OK with what was happening.”

Her father dismissed her after she came out, she said. But she added their relationship had been strained for a long time. He was abusive, she said, and caused her to develop post-traumatic stress disorder. As a teen, she couldn’t do much beyond trying not to interact with him.

“It was purely no contact out of fear,” she said.

The two reconciled in 2020 before the recent fallout.

“When he was elected I was told to keep my mouth shut. I did because at the end of the day, I really hoped he had changed,” she said. “When the Roe v. Wadecame to light, I voiced my concerns and he silenced them.”

“There’s so much more money and power-driven things he has done. I will likely make more TikToks on them.”

Adrian Dickey did not respond by publication to emails seeking comment.