TinyMart is sharing this content, the original was posted on jta.org by IDIT KLEIN and IS PERLMAN, MARCH 14, 2022 So please click here to go there
. 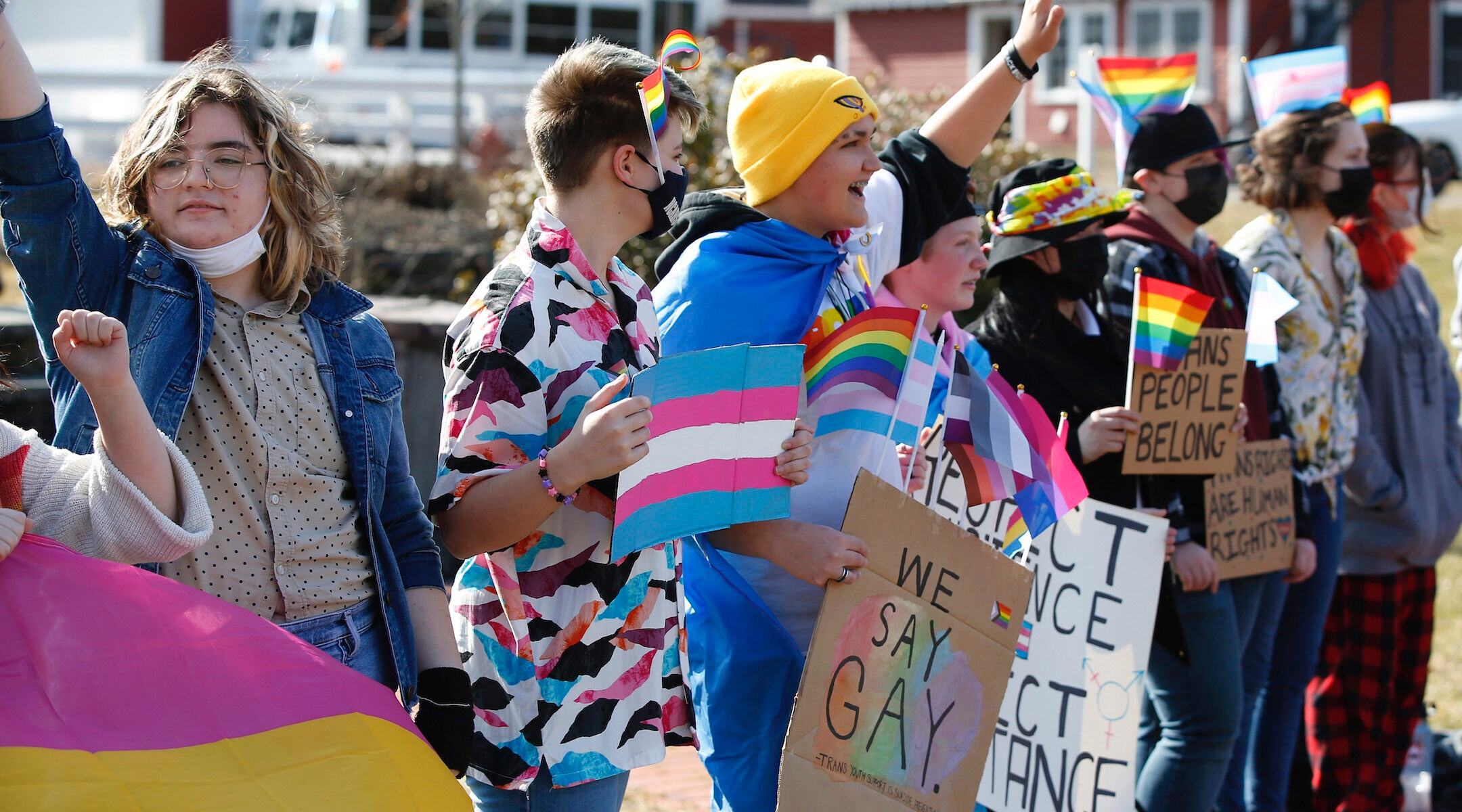 (JTA) — As we approach Purim – a holiday that honors the courage to be our true selves – we are alarmed by the surge of legislative attacks on the rights, safety and dignity of LGBTQ youth across the nation.

Among over 100 pending anti-LGBTQ bills are the recently passed “Don’t Say Gay Bill” in Florida and the terrifying equation of trans-affirming health care withchild abuse by the governor of Texas.

We are a queer Jewish communal professional and a non-binary Jewish college student. In the spirit of Purim, we recognize that now is a time when we must fight for ourselves, and we call on our beloved Jewish community to join us in our fight for the rights of LGBTQ people everywhere

One of us, Is Perlman, grew up in Florida and was blessed with parents who supported the start of their medical transition there. Despite that love and affirmation, Is endured years of self-loathing and shame due to the onslaught of anti-trans rhetoric in their local communities and the broader world. Indeed, Is was one of the 40% of trans and non-binary young people who attempt suicide by age 24. They’ve shared that it was only when they met other LGBTQ Jewish teens and adult mentors through a Shabbaton organized by Keshet — a national organization working for LGBTQ equality in the Jewish community — that they came to understand themselves as not just worthy of basic dignity, but as a holy person who is made in the image of the Divine.

If Is were still a high school student in Florida today, any reference to their identity or experience as a non-binary person could be banned under the newly-passed “Don’t Say Gay” law. For the many LGBTQ youth who live in Florida, this bill serves to further marginalize a group that already experiences severe stigma and isolation.

Legislators should be supporting educators to ensure that all students have access to affirming, safe learning environments where they can grow and evolve in the fullness of their identities. Instead, Florida legislators — and legislators in the dozens of states around the country that have introduced anti-LGBTQ legislation — are playing politics with the lives of LGBTQ youth and undermining their basic humanity. Do not be fooled by these politicians’ rhetoric. Do speak out to condemn how this law will spark shame and fear among LGBTQ youth and no doubt threaten their safety and even lives.

In Texas, the governor directed the Texas Department of Family and Protective Services to open child abuse investigations of parents who provide gender-affirming care for their trans children. This means that parents who support their trans kids and help them access the health care they need may be subject to investigation which could lead to their children being taken away. Imagine the terror that parents of trans kids and the kids themselves are now experiencing.

Thankfully, an ACLU lawsuit has thus far blocked its implementation, but we don’t know if they will succeed in permanently stopping this destructive policy. Already, Texas Children’s Hospital in Houston, the largest pediatric hospital in the country, announced that it will no longer prescribe gender-affirming hormone therapies. Hospital officials cited the governor’s directive as the reason for the change. Similarly, numerous parents of trans kids report that pharmacies are refusing to fill prescriptions and insurance companies are pulling coverage.

It has been nearly 40 years since legislation was first proposed to outlaw discrimination based on sexual orientation, with gender identity added more recently. We have been active in a national Jewish community campaign led by Keshet to support the passing of the Equality Act that would at long last give LGBTQ people the civil rights protections that everyone deserves in their homes, jobs, public services and more. If the Equality Act were federal law, it would be impossible for states to target LGBTQ young people with this spate of senseless, cruel legislation and policies.

At 18 years old, Is has already spoken publicly in multiple settings about what enabled them to survive their teenage years as a young trans person: access to trans-affirming health care and connections with other queer Jewish youth. Speaking with such vulnerability is never easy. But Is continues to do so because they understand the catastrophic impact of threats to the safety and wellbeing of trans youth everywhere.

Polls consistently tell us that a clear majority of American Jews support LGBTQ civil rights. We know from our own experience in the “Yes on 3” campaign to preserve transgender rights in Massachusetts that when called upon, our Jewish communities do take action: Over 70% of synagogues and other Jewish organizations played an active role in the campaign and helped us win. This is just one of many examples we could offer of how American Jewish communities have learned about, grown to support, and eventually have moved to take meaningful action on LGBTQ rights issues.

As we approach Purim, we invite Jewish communities nationwide to join us in heeding Mordechai’s words urging Esther to act: “Perhaps you have come to your … position for just such a time as this?”

The crisis for LGBTQ young people, especially trans youth, should concern all of us. There are so many ways to make a difference: speak out against harmful legislation with your state legislators and urge your senators to pass the Equality Act; mobilize people in your local Jewish community or organize an educational program; tell a trans kid in your life that they can count on your support. We need every Jewish community member to recognize this time as a time for action. Only then, will all LGBTQ youth be able to live with safety, dignity and the certainty that they, like every human being, are indeed holy.

We know from Is’ experience, and that of countless other trans young people, that trans-affirming care is the opposite of abuse; it is health care. Often, it is life-saving care. As a community whose highest value is pikuach nefesh, saving a life, we call on Jews everywhere to say to trans youth: Your life matters and we will fight to save it.

Is Perlman
is a Jewish non-binary first year student at Columbia University and a Keshet youth leader.

The views and opinions expressed in this article are those of the author and do not necessarily reflect the views of JTA or its parent company, 70 Faces Media.