TinyMart is sharing this content, the original was posted on lgbtqnation.com by  Alex Bollinger Tuesday, March 29, 2022, So please click here to go there
.

"Make no mistake: this is a part of a disturbing and dangerous trend across the country of legislation targeting LGBTQI+ students, educators, and individuals." 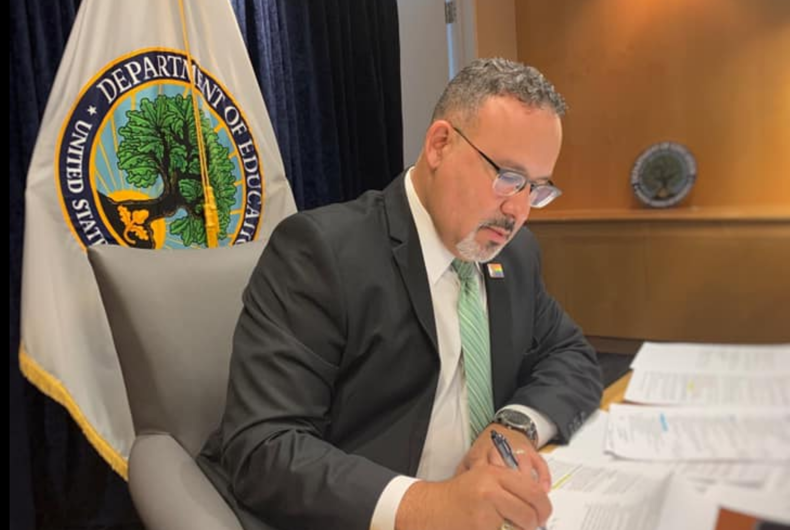 Education Secretary Miguel Cardona prepares to speak to the House Ed & Labor Committee on investing in education in 2021.Photo: Facebook

“By signing this bill, Gov. DeSantis has chosen to target some of Florida’s most vulnerable students and families, all while under the guise of ‘parents’ rights,'” Cardona said in a statement. “Make no mistake: this is a part of a disturbing and dangerous trend across the country of legislation targeting LGBTQI+ students, educators, and individuals.”

Related: Joe Biden addresses transgender community: “I see you, I hear you, and I’ll continue fighting”

H.B. 1557 has been condemned by Democrats, including President Joe Biden, who called it a “hateful bill.” Advocates of LGBTQ equality argued that banning certain kinds of families from being discussed in school would increase stigma against kids who come from those families and LGBTQ students.

Moreover, advocates argue that certain parts of the bill will require schools to out LGBTQ students to their parents.

“This comes at a time when we know lesbian, gay, bisexual, and questioning students are three to four times more likely than non-LGBTQI+ students to report experiencing persistent feelings of sadness, hopelessness, and even self harm – not because of who they are but because of the hostility directed at them,” Cardona said.

“Instead of telling some students or families it’s not okay to be who they are, our Department is fighting for dignity and opportunity for every student and family,” Cardona said. “We will be monitoring this law upon implementation to evaluate whether it violates federal civil rights law.”

LGBTQ advocates like Chasten Buttigieg have pointed out that LGBTQ teens are at a heightened risk of suicide and the bill would cut them off from help from their teachers. Out Secretary of Transportation Pete Buttigieg said that his children could be prevented from talking about their parents if they lived in a state with such a bill.

“Chasten, my husband, pointed out that if our kids some day – some Monday morning come into class, you know, and kids are sitting around and the teacher’s got the morning circle talking about how everybody’s weekends went, and one of them says, ‘I had the best weekend with my dads,’ is the teacher supposed to say, ‘No, we don’t talk about that here’?” Pete Buttigieg said on CNN last month.

Supporters of the bill, like the Log Cabin Republicans and the DeSantis administration, have generally said that opponents of the bill want to “groom” children and are pedophiles.