TinyMart is sharing this content, the original was posted on lgbtqnation.com by So please click here to go there
.

The anonymous Christian wrote that "God loves you" before sharing an anti-gay Bible verse. 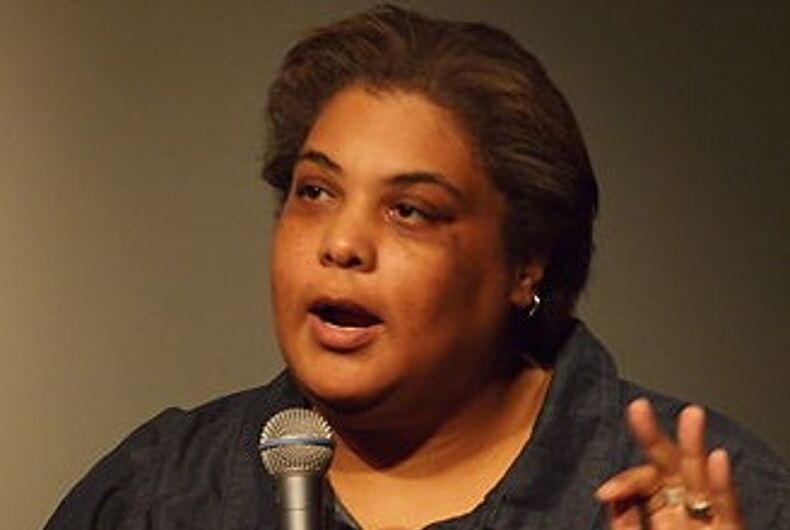 Out bisexual author, professor, and social commentator Roxane Gay has removed all of her old tweets on her Twitter account after sharing a homophobic letter she received in the mail that used a Bible verse to condemn her.

In a now-deleted tweet, published on Tuesday afternoon, Gay wrote, “Got some nice homophobic mail today from someone who, I guess, saw the pride flag hanging outside our house and just had to reach out. Used a stamp and everything.”

Her tweet included the photo of an anonymous note.

The majority of the letter recited the Bible verse: “Their women exchanged natural relations for unnatural and the men likewise gave up natural relations with women and were consumed with passion for one another, men committing shameless acts with men and receiving in their own persons the due penalty for their error,” the anonymous author wrote.

The letter concluded, “Pls disregard if not Christian.”

The letter’s envelope showed that it was mailed to her address, but it did not include her name. The envelope was addressed to “resident/occupant.”

Despite the letter’s use of a Bible verse, many Christian churches welcome same-sex and LGBTQ couples and even conduct queer weddings. Though 55 percent of evangelical Protestants in the U.S. oppose homosexuality, nearly 70 percent of Catholics in the U.S. support it, a Pew Research study found.

Later on Tuesday, Gay deleted all of the tweets from her personal Twitter account, leaving only two: one from March 2020 and another showing her score on the popular online spelling puzzle-game Wordle.

LGBTQ Nation contacted Gay to ask about the letter and her deleted tweets. Gay responded, “I delete my tweets every month or so. There isn’t much to say about the homophobic note. We received it in the mail today. It’s disheartening but also ridiculous and a reminder that progress is always incomplete and homophobia is alive and well, even in supposedly liberal cities.”

In other recent Gay news, the author was recently chosen to be the next Gloria Steinem Endowed Chair in Media, Culture and Feminist Studies at Rutgers University-New Brunswick. There, she will lead workshops to explore writing on cultural criticism, trauma, creating change, and writing across differences.  Her three-year tenure will kick off as she participates in a public conversation about contingent civil rights centered around Roe v. Wade, including marriage equality and trans equality.

In the interview, Gay asked Rapinoe, “There are a lot of issues we’re dealing with as a country, and some of those issues are incredibly complex and polarizing. How do you educate yourself about the issues you choose to take a stand on?”

Rapinoe responded, “Cable news is a beast I’ve had to take a step back from. I don’t even know if we’re getting news from cable news, but whether it’s articles or podcasts or voices I trust, I try to keep tapped into that. I love to talk about these things, too. I also don’t feel like a lot of these issues are complicated. They’re all interconnected and pretty much come down to people holding onto power and the way that our country was founded, which is on brutal slavery, and sexism, racism, homophobia. The more you read, the more that becomes clear.”