TinyMart is sharing this content, the original was posted on lgbtqnation.com by ﻿ Daniel Villarreal Monday, August 29, 2022, So please click here to go there
.

The anti-LGBTQ protesters held signs that said, "Drag the queens out of town" and "Stop sexualizing children." 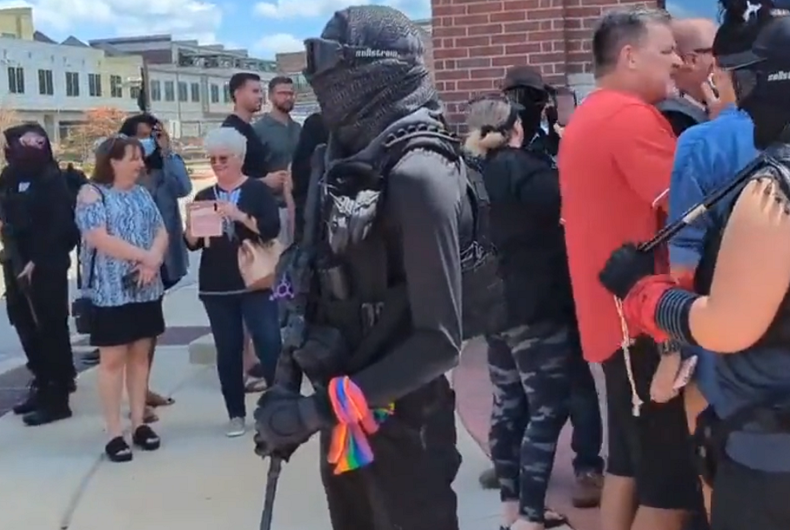 A counterprotestor wears a rainbow while carrying a rifle.Photo: Screenshot

Anti-LGBTQ demonstrators protesting a Sunday drag brunch at Anderson Distillery and Grill in Roanoke, Texas were met by armed counterprotesters carrying rifles. The incident illustrates the growing culture war as rightwingers baselessly accuse drag performers and the queer community of “sexualizing children,” leading to threats of violence and mounting tensions.

The restaurant held a “Barrel Babes Drag Brunch” on August 28. Its advertisement said, “All Ages Welcome!” The brunch was hosted by drag performer Trisha Delish.

News of the event quickly spread on right-wing social media with groups like Texas Family Project and Protect Texas kids both alerting their followers to the event. Both groups regularly post messages against transgender youth and LGBTQ civil rights.

Steven Monacelli, a journalist with Rolling Stone and Texas Observer magazines, posted a tweet with pictures of the protest. Monacelli’s tweet read, “Anti-trans activists are protesting a drag brunch in Roanoke, Texas, but are outnumbered by supporters of the event. I’ve only been here for about five minutes and I’ve already seen quite a few heated exchanges.”

A Reddit user butcher_of_the_world posted an image of a Proud Boy allegedly taken from the protest. In the image, the Proud Boy wears a yellow bandana over his face and sunglasses while holding a baseball bat covered in barbed wire. The Proud Boys have repeatedly harassed and attacked family queer events over the past year.

A Reddit user named werdmouf posted a nearly two-minute video of the incidentwhich showed the armed counter-protesters standing outside of the venue. One of them carries a queer Pride flag while a bearded man claims that another one of the guards spit on him.

When approached by an interviewer, the man admits that he called the armed guards “F**king pu****s,” and says, “I’m here to support people who don’t indoctrinate and groom little eight-year-old kids.” Republicans have repeatedly claimed that anyone who lets children know that LGBTQ individuals exist is trying to “groom” them for rape.

When a female police officer tries to get the man to stand away from the armed guards, another man wearing an Infowars T-shirt comes over and tells the man that he doesn’t have to listen to the officer. Infowars is a far-right program that peddles conspiracy theories, including Pizzagate, which accused a gay-owned Washington D.C. pizza shop of running a child sex trafficking ring in its non-existent basement.

Another man in the video expresses anger that the armed guards have covered their faces in bandanas and sunglasses. Some Antifa and Proud Boys members hide their faces to avoid having their images taken and identified by police or web users.

Kris Cruz, a producer on the far-right media outlet Blaze TV, wrote via Twitter, “Armed #Antifa showed up in Roanoke, TX to protect the ‘kid friendly’ drag show at this bar. Armed #Antifa escorted attendees to the vehicles. I counted about 9 AR-15s.”

At other drag events, anti-LGBTQ protesters have followed, harassed, and doxed the performers and parents who bring their children to the events.

In response to news of the incident, Texas state Rep. Bryan Slaton (R) wrote “A drag show is no place for a child. I’m working to ban these entirely next session. I look forward to working with @FamilyProjectTX to make this happen.”

Slaton has previously said that he would like to sponsor such legislation. He characterizes kids attending drag shows as tantamount to sexual abuse. “The events of this past weekend were horrifying and show a disturbing trend in which perverted adults are obsessed with sexualizing young children,” he said.

However, Slaton hasn’t yet specified exactly what he means by “drag shows,” how they’d be defined in a bill, or how his bill would avoid violating the Constitution’s protections for free speech.