TinyMart is sharing this content, the original was posted on lgbtqnation.com by ﻿ Dr. Warren J. Blumenfeld Saturday, September 3, 2022, So please click here to go there
.

Joe Biden blasted the so-called "Make America Great Again" philosophy arguing that it is “like semi-fascism.” But is it? 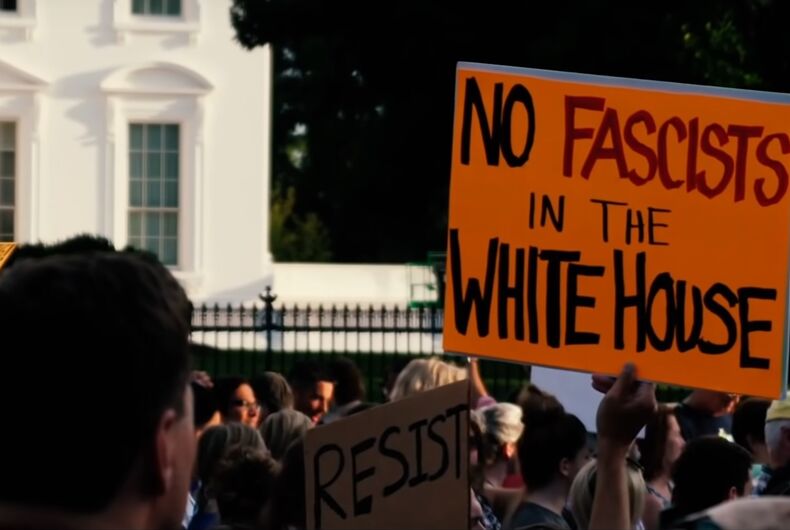 A White House protest is included in the videoPhoto: YouTube screenshot/Lincoln Project

At a recent Democratic fundraiser in advance of the upcoming midterm elections, President Joe Biden blasted the so-called “Make America Great Again” philosophy arguing that it is “like semi-fascism.” There is plenty of evidence to prove his point.

This extreme segment of the Republican Party is attempting to impose severe restrictions on what can and cannot be taught in public schools by permitting only topics, curricular materials, and subjects aligning with its political philosophies. It has imposed constraints on certain individuals and groups’ voting rights, access to the ballot box, and has gone after volunteer and salaried non-partisan election officials.

The overarching Republican Party has waged a longstanding and recently victorious assault on individual reproductive rights and freedoms. It is working vigorously to repeal marriage equality, and to make it a criminal offense for parents who permit family members in obtaining gender-affirming procedures.

The Party continues to demonize black and brown potential immigrants by citing the “Great Replacement Theory,” a racist trope that dates back to Reconstruction in the United States. Replacement ideology holds that a hidden hand (often imagined as Jewish) is encouraging the invasion of nonwhite immigrants and the rise of nonwhite citizens to take power from white Christian people of European stock.

And MAGA believers continually attack and attempt to subvert and discredit the mainstream (referred to as “the lamestream”) press when reporting the facts about this movement. In short, the MAGA Republicans have initiated a frontal assault on some of the major democratic institutions of the United States of America.

But, is this movement really “semi-fascist” as Biden asserts?

“The United States Holocaust Memorial Museum is deeply alarmed at the hateful rhetoric at a conference of white nationalists held on November 19 [2016] at the Ronald Reagan Building just blocks from the Museum…The Holocaust did not begin with killing; it began with words. The Museum calls on all American citizens, our religious and civic leaders, and the leadership of all branches of the government to confront racist thinking and divisive hateful speech…”

These words from a press release from the United States Holocaust Memorial Museum in Washington, DC refers to a white nationalist conference headlined by neo-Nazi, Richard Spencer, who greeted attendees with a tribute to then President-elect Donald J. Trump shouting “Hail Trump! Hail victory!” from the stage before all in attendance gestured in a traditional Nazi straight-arm salute.

Once identifying himself as a Democrat, Donald Trump and what has become known as “Trumpism” has transformed, at the very least, into the mouthpiece of the far-right wing of the Republican Party.

In political terms, a “strongman” is one who leads by force within an overarching authoritarian, totalitarian, dictatorial regime. Sometimes the formal head of state, sometimes another political or military leader, the strongman exerts influence and control over the government more than traditional laws or constitutional mandates sanction.

Strongmen situate themselves within positions along the political spectrum, usually toward the extremes on the right and the left. They find themselves in the company of, for example, Juan Perón of Argentina, Pol Pot of Cambodia, Fidel Castro of Cuba, Francois Duvalier of Haiti, Saddam Hussein of Iraq, Manuel Noriega of Panama, Vladimir Putin of Russia, and Idi Amin Dada of Uganda.

On the right-wing side of the dictatorial strongman’s political spectrum, we find the philosophy and practice of “fascism.” While also deployed as an epithet by some, fascism developed as a form of radical authoritarian nationalism in early-20th century Europe in response to liberalism and Marxism on the left.

While many governmental leaders and candidates for public office may push for a number of these tactics while still remaining outside the definition of “fascist,” the cumulative effect increases depending on the severity of and the degree to which they initiate these measures.

What Is Trump’s Brand of Fascism?

Donald Trump, what he has stated and purported previously falls directly within the parameters of fascism. Using Britt’s taxonomy, I filled in Trump’s positions:

Now that Trump is currently out of power, the MAGA movement, though, is running at full force, for one does not have to have Trump to maintain and expand Trumpism.

The only remaining question is whether the MAGA movement reflects “semi-fascism” or full-on fascism.

Referring back to the United States Holocaust Memorial Museum’s historical reminder, though, “The Holocaust did not begin with killing; it began with words.”