TinyMart is sharing this content, the original was posted on lgbtqnation.com  by  Alex Bollinger Thursday, May 19, 2022 So please click here to go there
.

An abortion case made it so that even laws that "conflicted with best medical practice" can be passed, he explained gleefully. 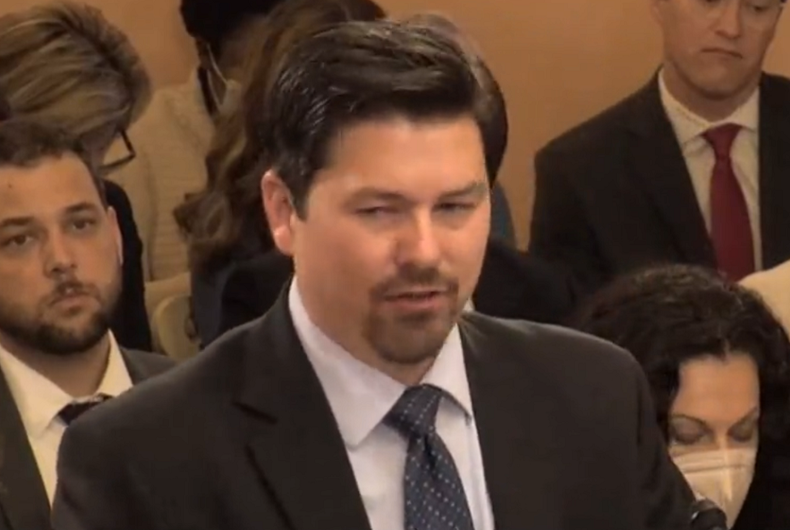 A rightwing lawyer explained how the fights for reproductive rights and for transgender people’s access to gender-affirming medical care are connected when it comes to the law.

Ohio’s House Families, Aging, and Human Services Committee Meeting held a hearing today about H.B. 454, which would ban doctors from providing gender-affirming care to transgender youth and requires teachers to out trans kids to their parents. All of the witnesses at the hearing supported the bill, and most were from religiously affiliated organizations.

Citing an abortion rights case, Matt Sharp of the anti-LGBTQ hate group Alliance Defending Freedom (ADF) testified to explain that courts actually might uphold the law even though it’s telling doctors to practice medicine in a sub-optimal way.

“Opponents challenged the law on several grounds, including that the law’s requirements conflicted with best medical practice,” Sharp said. “But the Sixth Circuit upheld the law and the authority of the legislature to pass it.”

“The court found that states can enact laws that limit medical procedures even when opponents claim that the laws were, quote, ‘directly contrary to medical profession custom’ and that certain medical groups did not consider them to be necessary.”

Sharp was referring to the 2019 appeals court decision in EMW Women’s Surgical Center v. Beshear, where a reproductive health care provider challenged Kentucky’s 2017 Ultrasound Informed Consent Act. The bill required people who wanted an abortion to have an ultrasound over 24 hours before the procedure and required doctors to allow the pregnant person to hear the fetal heartbeat and explain the images the ultrasound produced. They argued that it violated doctors’ freedom of speech.

A Trump-appointed judge, John K. Bush, wrote the majority opinion and said that the bill was fine because it “provides relevant information” that “gives a patient greater knowledge of the unborn life inside her.”

Effectively, Sharp argued that a court already said that doctors’ opinions on what’s best for patients can be overridden by legislatures and that courts will allow the same to be done to transgender people.