TinyMart is sharing this content, the original was posted on lgbtqnation.com by  John Russell, Wednesday, July 13, 2022, So please click here to go there
.

Jesse Lee Peterson has described homosexuality as “the spirit of the devil” infecting people. 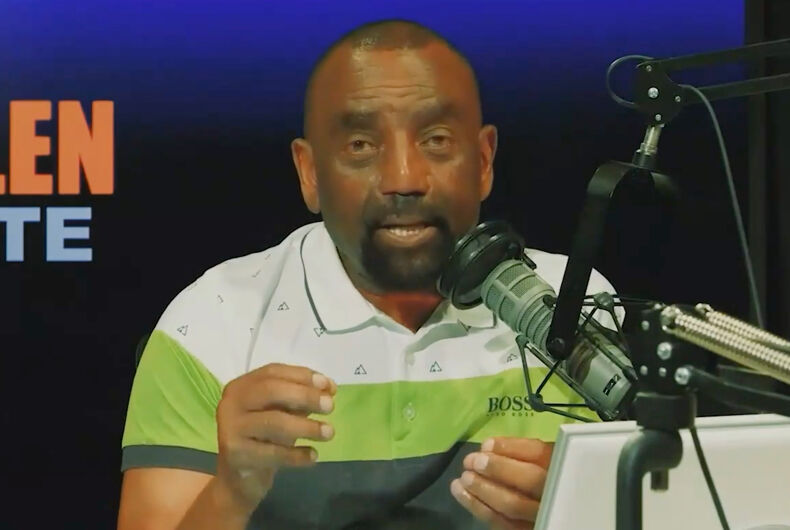 Los Angeles-based anti-gay pastor, online radio host, and “manosphere” star Jesse Lee Peterson is alleged to have had multiple gay relationships and exhibited a pattern of sexually harassing male associates. Several of Peterson’s former friends and associates have come forward, including one who claims to have been in a decade-long sexual relationship with Peterson.

The accusations have caused leading figures in the online “manosphere”—a loose network of men’s rights activists, incel groups, and similar organizations—to distance themselves from Peterson, banning him from events and speaking engagements.

Radical right-wing Catholic site Church Militant first broke the story in June with a 30-minute video featuring interviews with the men accusing Peterson of making sexual advances toward them. Another, Patrick Rooney, says he was sexually involved with Peterson, who is unmarried, for roughly 10 years, despite being married to a woman.

Rooney, who has known Peterson since 1992, claims in the video that the pastor made subtle sexual advances toward him for years, but they didn’t become sexually involved until 2005. He admits to having no proof of their relationship, however.

“Jesse Lee Peterson is a very smart person, he’s a sly person,” Rooney says in the video. “He’s not going to leave a lot of extraneous evidence out about what he does.”

Rooney says that after he started writing blog posts alluding to his relationship with Peterson, he was approached by Samuel Arambula, who is also featured in the Church Militant video claiming that Peterson subjected him to unwanted sexual touching at the Los Angeles house where Peterson lives with other members of his Brotherhood Organization of a New Destiny (BOND).

According to The Daily Beast, the video follows an online spat between Peterson and Church Militant’s founder Anthony Michael Voris, who has been described as “one of the U.S. Catholic Church’s most infamous agitators.”

Peterson has reportedly refused to address the allegations in the video, telling one caller on his show that “it’s not concerning to me.”

Peterson has described homosexuality as “the spirit of the devil” infecting people, and asserted that it is the result of abuse. In June 2021, Peterson, who is Black, called for Christians to celebrate “white history” in opposition to LGBTQ Pride month.