Alabama's Wave of Anti-LGBTQ Legislation Could Have National Consequences

TinyMart is sharing this content, the original was posted on time.com by  MADELEINE CARLISLE, APRIL 15, 2022 11:40 AM EDT, So please click here to go there
. 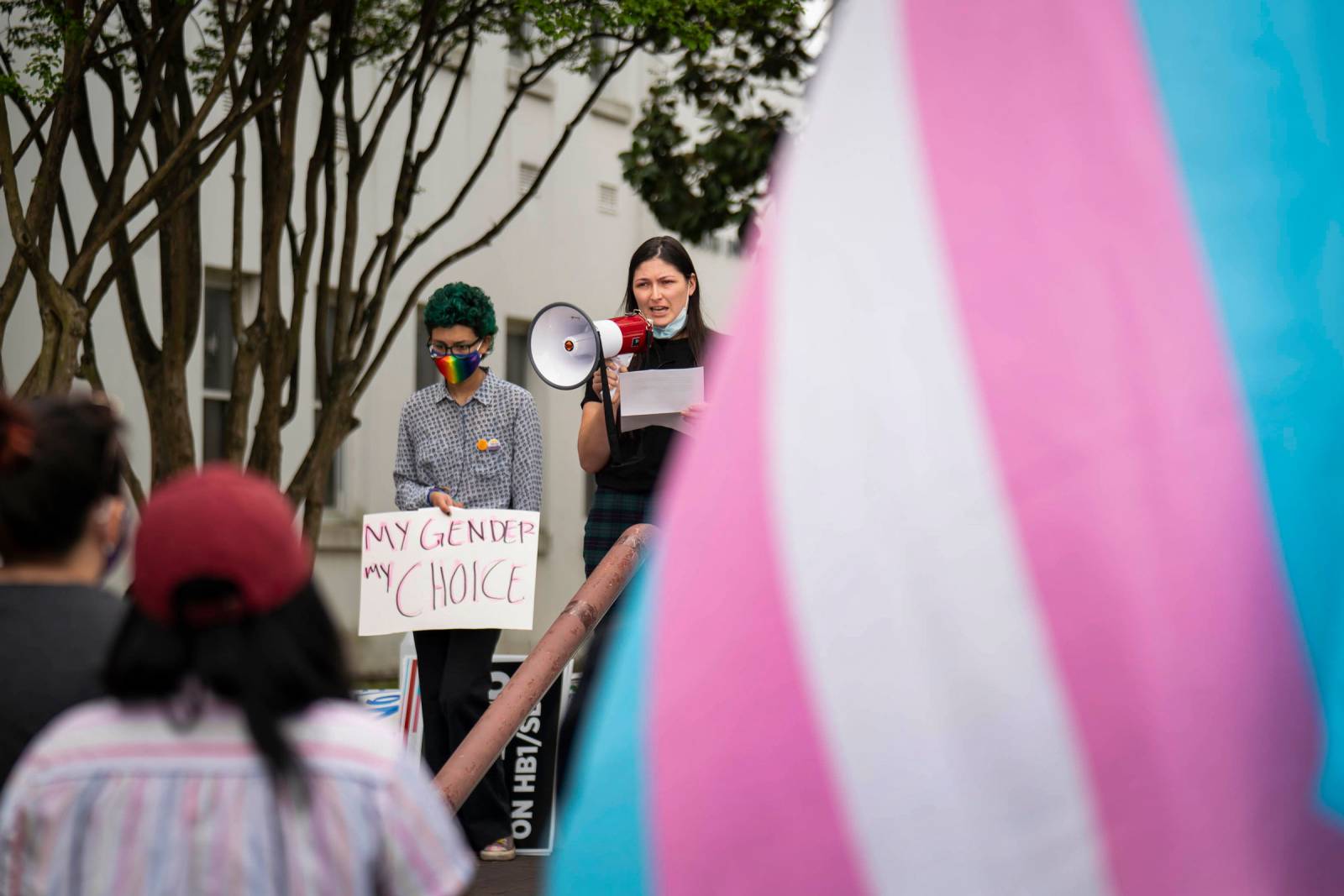 Katie doesn’t want to leave Alabama. The 15 year old has spent her entire life in the state. It’s home.

But soon she may have to. On April 8, Republican Governor Kay Ivey signed a law banning doctors from providing gender-affirming medical care to young people—care that trans youth like Katie rely on. The law includes an unusual provision causing it to go into effect in 30 days, meaning that come May 8, Katie’s doctors will no longer legally be allowed to continue her medical care.

“I just want to be able to live my life without having to worry about lawmakers taking away my medical treatment,” says Katie, who TIME is referring to by a pseudonym because she fears discrimination in her community for being trans.

Alabama’s new ban on gender-affirming medical care is the most extreme in the country. While Arkansas and Texas have also restricted such treatment, only Alabama has made it a felony for medical doctors to provide gender-affirming care to anyone under 19—punishable by up to 10 years in prison. Ivey signed another law that same day banning trans students from using sex-segregated school facilities, such as bathrooms, that are aligned with the gender identity. That legislation also included a modified version of Florida’s so-called “Don’t Say Gay” law, which went further than the original by banning all “classroom discussion” of sexual orientation or gender identity in grades K-5. Both restrictions are set to go into effect in July, and come on the heels of last year’s Alabama law prohibiting trans athletes from playing on the sport teams aligned with their gender identity.

Put simply, Alabama is now the epicenter of laws targeting LGBTQ youth across the country. “It’s taking every form of anti-trans legislation, and really taking it up to 11,” says Kaitlin Welborn, staff attorney at the ACLU of Alabama.

While Alabama may be ground zero for these types of laws, its effort is part of a broader nationwide surge in anti-LGBTQ legislation. Conservative state lawmakers have introduced at least 238 anti-LGBTQ bills in 2022 alone, roughly half of which specifically target trans people, per an NBC News analysis. Fifteen states have banned trans students from playing on sports teams consistent with their gender identity. And while Alabama is the first state to pass a felony restriction on gender-affirming care, similar bills have gone before 18 state legislatures this session. (The ACLU has sued over similar bans in Arkansas and Texas, which have been blocked while litigation plays out.) Chase Strangio, the deputy director for transgender justice at the ACLU LGBTQ & HIV Project, says he expects states with trans sports bans will continue to try to escalate to other forms of restrictions.

Alabama’s laws are already meeting legal challenges. Two lawsuits were filed in the past week attempting to block the new ban on gender-affirming care for young people. The fate of the lawsuits could affect more than just LGBTQ youth in Alabama: the result of the challenges could signal whether similar laws around the country will stand or fall.

Meaning that the choice facing Katie’s family—whether they need to leave their home so their child can continue accessing affirming medical care—could soon be facing many more.

Alabama Gov. Kay Ivey waves as she arrives to deliver her State of the State address at the State Capitol Building in Montgomery, Ala., Jan. 11, 2022.

In a letter sent to all state attorneys on March 31, the U.S. Department of Justice said bans on gender-affirming care may violate the Constitution, particularly the 14th Amendment’s equal protection and due process clause. It was a shot across the bow for states advancing such restrictions, and the strongest statement the executive branch has so far made on the issue.

Now, litigation over Alabama’s new law will shine a light on whether federal judges agree.

The ACLU, along with Lambda Legal, Transgender Law Center, and the law firm Cooley LLP filed one of two major lawsuits this week attempting to block Alabama’s ban from taking effect, arguing it violates the Constitution. (Welborn says they’re keeping “all legal avenues open” in terms of challenging the other restrictions, but are primarily focusing on the medical ban due to the unusually swift enforcement and extreme criminal penalty.) The second lawsuit was brought by the Southern Poverty Law Center, the National Center for Lesbian Rights (NCLR), GLBTQ Legal Advocates & Defenders, and the Human Rights Campaign with the firms King & Spalding LLP and Lightfoot, Franklin & White LLC.

Both lawsuits argue that Alabama’s ban on gender-affirming care violates the Equal Protection Clause by discriminating against transgender people and infringes on parents’ rights to follow a medical professional’s advice on what’s best for their child.

“There are very real challenges facing our young people, especially with today’s societal pressures and modern culture. I believe very strongly that if the Good Lord made you a boy, you are a boy, and if he made you a girl, you are a girl,” Alabama Gov. Ivey said in a statement on April 8. “We should especially protect our children from these radical, life-altering drugs and surgeries when they are at such a vulnerable stage in life. Instead, let us all focus on helping them to properly develop into the adults God intended them to be.” (It’s rare for a person under age 18 to undergo any type of surgical intervention, according to The American Academy of Pediatrics.)

Dr. Morissa Ladinsky, a pediatrician at UAB Medicine in Birmingham who works with trans youth from Alabama and surrounding states, is a plaintiff in NCLR’s lawsuit challenging the new policy. That lawsuit also argues the law defies the supremacy clause of Article VI, which establishes that federal law takes precedence over state law. Ladinsky’s hospital receives federal funding, meaning it must adhere to the Affordable Care Act, the legal team argues. The Affordable Care Act prohibits discrimination on the basis of sex, which the Biden Administration interprets to include on the basis of sexual orientation or gender identity. Ladinsky now must choose, her team argues, between following federal law or risking 10 years in prison and costing her hospital federal funding.

How the court reacts to these arguments could determine how legal challenges in the future are crafted. While the litigation won’t impact other states unless it reaches the appeals level, the results in Alabama could still be persuasive for other states and lawmakers watching as they consider drafting their own laws, says Asaf Orr, senior staff attorney at NCLR, and for the lawyers in turn deciding how to file the lawsuits.

When asked to comment on the lawsuits, Ivey’s communications director Gina Maiola said their office is “prepared to defend our values and this legislation.”

‘Forces our hand to actually do harm’

If you asked Jeff Walker what his daughter was like five years ago, he would have told you she was quiet and reserved. Now, since she’s begun gender-affirming care, she is confident, outgoing, and courageous, he says.

“She is who she is meant to be today,” Walker says. “And it’s because of starting off with this wonderful team of doctors and having the support of her family.”

Walker and his wife Lisa are plaintiffs in the ACLU’s lawsuit challenging Alabama’s felony ban on affirming care. They argue the ban violates their right to make the best medical decisions for their 15-year-old daughter.

Gender-affirming care can help young people experiencing gender dysphoria, which is often described as the discomfort or distress that might occur when a person’s gender identity is inconsistent with the sex they were assigned at birth, according to the Mayo Clinic. In young children, gender dysphoria can be treated with non-medical social and behavioral interventions. After puberty has begun, a child experiencing gender dysphoria may also begin receiving puberty blockers, which can help “reduce distress that may occur with the development of secondary sexual characteristics” and reduce the need for surgery in the future by holding off physical changes, according to the American Academy of Pediatrics. When they get older, some adolescents may begin taking gender-affirming hormones, such as testosterone or estradiol.

Jodi Womack holds a sign that reads "We Love Our Trans Youth" during a rally at the Alabama State House to draw attention to anti-transgender legislation introduced in Alabama on March 30, 2021 in Montgomery, Alabama.

An emerging body of research has found that affirming care models can help alleviate mental health concerns for trans and gender expansive young people. A peer-reviewed study published in the Journal of Adolescent Health in December 2021 found that the use of gender-affirming hormone therapy was significantly related to lower rates of depression, suicidal ideation, and suicide attempts among trans and nonbinary youth. The study, led by researchers at the LGBTQ suicide prevention nonprofit The Trevor Project, also found that among trans and nonbinary people under 18, receiving gender-affirming hormone therapy was associated with nearly 40% lower odds of having had a suicide attempt in the past year. Major medical organizations including the American Medical Association, the American Psychological Association, and the American Academy of Pediatrics have decried bans on gender-affirming care.

“Pediatricians are dedicated to the well-being of all children. Laws like these directly interfere with their ability to keep their patients healthy and provide evidence-based care,” Mark Del Monte, the CEO of the American Academy of Pediatrics, said in an April 7 statement. “This legislation targets vulnerable young people and puts them at great risk of physical and mental harm.”

Alabama’s new law has no grandfather clause that exempts young people who are already receiving affirming care. Meaning that, come May 8, Ladinsky—the pediatrician who treats trans youth in the state—can’t treat any of her patients, even older adolescents who might have been on puberty blockers or hormone replacement therapy for years. “Forcing us to cease care that’s already ongoing and successful… not only does it violate a major tenet of medical ethics that we all took an oath to uphold, but it also forces our hand to actually do harm,” Ladinsky says. “Youth who were on an amazing trajectory from really dark places may well be catapulted backward… That fallout on mental health is terrifying.”

Katie’s mother and Walker have both assured their daughters that if they need to leave the state to get their care, they will. But that’s no simple decision for families that have deep ties and other commitments in their home state; Walker’s son, for example, is in the middle of a 3.5-year commitment with the Alabama National Guard. “These legislators say they’re protecting the family,” Walker says. “They are doing nothing but splitting families up and making them have to make decisions that they don’t want to make.”

Meanwhile, Katie and her mother are weighing whether to take her out of her sophomore year of high school and away from the rest of their family. “Honestly,” Katie says, “I’m a little scared.”