After homophobe tore up his Pride decor, this Albuquerque man responded in the best way

TinyMart is sharing this content, the original was posted on queerty.com by ﻿ Charlie Grey, 23.06.22, So please click here to go there
. 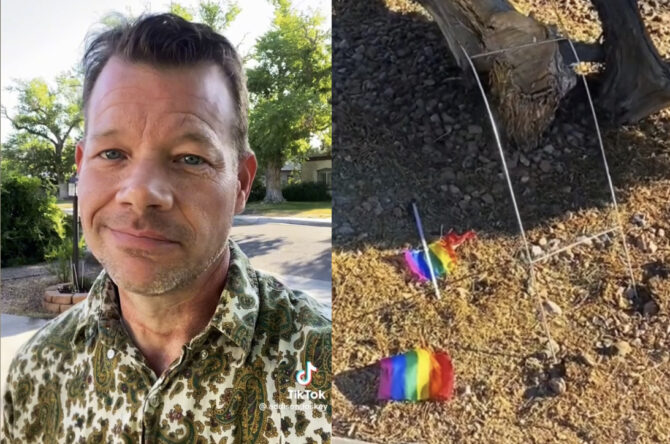 After an anonymous homophobe tore up his Pride decor, one man decided to prove that you can’t stop a rainbow from forming.

Albuquerque resident Addison Foskey found the human rights sign and two Pride flags he’d planted in his yard vandalized earlier this month. Rather than despair or anger, he opted for the perfect response: rainbow revenge.

First, Foskey got local news on the scene almost immediately in hopes that his vandal would hear his message.

“I have ordered 100 more flags, and the yard will be awash in color,” Foskey told KOB 4. “We will  — if that one person was so upset by that one flag — see their head explode when all the flags are up.”

Between the news segment and the wildfire spread of his story on TikTok, many were outraged and ready to support Foskey in his plan. Folks from across the country sent in hundreds of additional Pride flags and stickers to add to his increasingly huge collection.

After spending days gathering flags, mapping out the yard, and installing new flagpoles, Foskey set up one of the most flagrantly fruity displays his town has ever seen.

He even wrote the names of his supporters on some of the flags, driving home the message of the queer community as a supportive and unified front.

Foskey reportedly plans to keep the display up til the end of the week, before taking the flags to somewhere they can flourish even more: the Pride Parade in Santa Fe, New Mexico.

May every homophobe take note that tearing down one Pride flag only makes a hundred more sprout in its place.