A Florida university denied rescinding lesbian student’s acceptance, but she had the receipts

TinyMart is sharing this content, the original was posted on lgbtqnation.com by  Daniel Villarreal, Wednesday, July 13, 2022, So please click here to go there
. 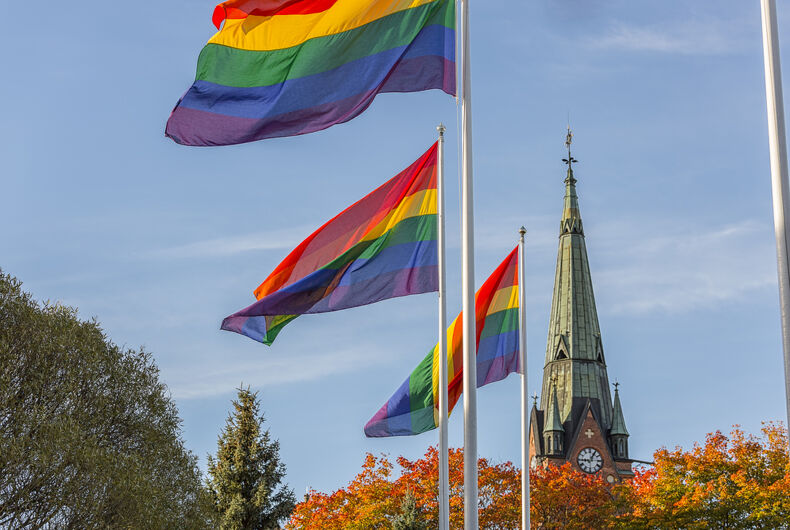 A young woman named Gianna Palmo was offered admission at Palm Beach Atlantic (PBA) University, a Christian school in Florida. However, when the school discovered that she was a lesbian, they withdrew the offer.

Palmo then shared a video on social media announcing what had happened. When that video went viral, PBA claimed that she had voluntarily withdrawn from the school. Little did PBA realize, Palmo had recorded audio of one of the school’s admissions representatives explaining to her that it would be unacceptable to have her living in a dorm with other women.

Related: Christian Americans have a history of using the Bible to excuse the worst in humanity

On July 6, Palmo posted a TikTok video that had a text overlay reading, “when ur Floridian college decides to not take u anymore bc ur gay.” The caption of the video stated, “how is this allowed in 2022??!! Anyway attack PALM BEACH ATLANTIC UNIVERSITY.”

The video showed Palmo, a young blonde woman, making a heart shape with her two hands. While a song says, “I’m Heartbroken,” she shakes her head “no” and breaks the heart apart before smiling and shaking two middle fingers at the camera.

Palmo also shared the video on her Instagram. There, the university’s official Instagram account left a comment stating, “PBA was informed that Gianna Palmo withdrew her deposit from the University. At no time did PBA rescind her admission—instead, the university was making plans for her arrival. We wish Gianna all the best in her future endeavors.”

However, Palmo responded by sharing a follow-up video featuring audio from a phone call that she had with a person she identified as the head of PBA admissions. Palmo explained that the school had asked to speak with her regarding one of her Instagram posts which showed her and her girlfriend kissing in front of a rainbow Pride flag.

During the call, the representative explained, “When 10, 20, 60, 80 girls start living in the same residence hall, people coming from different backgrounds, people coming from different parts of the country, there are different standards for what is considered acceptable behavior, and beyond that, PBA has a standard for conduct that’s related to PBA’s mission, philosophy, and standards for how we live our life according to the Bible.”

Indeed, PBA’s student handbook says, “Sexual immorality, including fornication, adultery, and homosexual behavior, is prohibited in Scripture… because our bodies are ‘a temple of the Holy Spirit.’… We believe that Christian marriage is between a man and a woman…. PBA expects that its students, faculty, and staff will neither engage in nor promote views of sexuality or gender expression that contradicts biblical standards.”

In a follow-up video, Palmo said that, after leaving a comment on her Instagram, PBA had since blocked her on Instagram and disabled comments on all of its posts.

Palmo later shared a text message that she sent to a PBA university representative which said, “I received a call interrogating me about my sexuality, the way I was spoken too was extremely unwelcoming and made me feel awful.”

“I should not have to worry about being a target while trying to focus on my academics and follow through with my faith,” her text continued. “I did not expect this from such a school that presents themselves as highly as shown. I am hurt about this. It is 2022 and it’s a shame that homophobia is still an issue in todays day and that it’s tolerated at PBA.”

While some commenters told Palmo that she should sue the school for discrimination, it’s entirely legal for private religious schools to discriminate on the basis of sexual orientation and religious beliefs. Title IX, the federal law that prohibits discrimination based on sex in education, has a religious exemption for schools affiliated with a religious organization.

Palmo has since said that numerous PBA students have reached out to tell her that she “dodged a bullet and this is a blessing in disguise” because this isn’t the first time something like this has happened at the school.

Alex Whitehead, who served as PBA student body president during the 2019-2020 school year, wrote on her Instagram post, “Unfortunately, I can assure people your story is completely legit. I publicly came out as gay last month. The only reason it took that long was because I knew they could remove me from my position or the school entirely since Florida has practically no protections for LGBTQ+ individuals.”

Whitehead noted the ban on “homosexual behavior” in PBA’s student guidelines, adding, “When we tried to change the wording, I was told it was deliberately vague so they can enforce the rule as broadly as they want.”

“I’m sorry they chose to use that against you,” he wrote to Palmo. “But I’m hopeful you’ll find a college where you can proudly be who you are.”