TinyMart is sharing this content, the original was posted on queerty.com by David Reddish April 10, 2022 at 7:04am, So please click here to go there
. 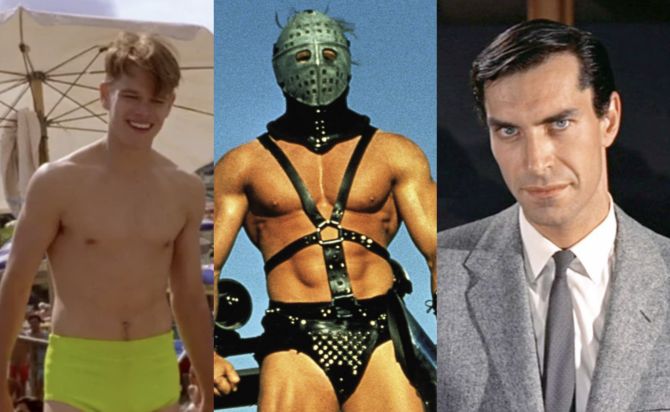 Once upon a time in Hollywood, LGBTQ people didn’t exist, at least on screen.

Early censorship codes labeled queerness as a topic far too explosive for the movies. Still, that didn’t mean LGBTQ people didn’t sneak into a movie or two, usually as a cold-blooded killer. Thus began the unpleasant trope of seeing queer people on screen as ruthless villains.

Related: Rosamund Pike & Eiza González on how to play a gay villain without being a homophobe

Fortunately, times–and movies–have evolved to show LGBTQ heroes too. We still have a bit of discomfort when it comes to queer baddies, though some have managed to endear themselves to us. Like these fine folks.

None of the villains profiled below are exactly people we’d want to be friends with. On the other hand, we’re pretty sure they’d have a field day kicking the living crap out of any homophobes. So, prepare to stream, dear readers. These classic queer villains have inspired us to love them… crazy and all.

Lord Humongous from The Road Warrior

First off, the name should say it all. The primary villain of The Road Warrior, the second film in the Mad Max series, heads up a very obviously gay motorcycle gang bent on usurping one of the world’s last supplies of oil. Plenty of critics have attacked the subtext for homophobia, suggesting that the rampant leather fetishism and homosexuality are indicative of the decline of civilization. They may have a point… though we also think it’s possible to see the movie as arguing that Humongous & Co. were actually liberated from institutionalized homophobia, and have banded together to survive. Besides, it looks like they’re having a very good time.

Leonard from North by Northwest

Alfred Hitchcock gets a lot of blowback–rightfully–for his use of coded LGBTQ villains in his thrillers. That subject deserves a longer discussion unto itself. For our purposes here, though, we’d point out that Hitchcock’s villains were the most appealing part of a story to him. He had no interest in heroes or innocents. He relished his baddies. Case in point: Leonard (Martin Landau), the effete and femme henchman. Leonard spends the movie slinking through the background, commenting on his love for fashion and his “women’s intuition.” Yes, really. We’re also pretty sure that his devotion to his boss Vandamm (James Mason) stems from a bit more than a paycheck.

Rosa Klebb in From Russia With Love

What to do about James Bond, the womanizing, death-defying MI6 agent who still commands a devoted fanbase despite some very rapey early stories? Paging Rosa Klebb! Audiences–and Bond–recoiled from Klebb (Lotte Lenya) back in 1963 thanks to her sadism… and her portrayal as a butch lesbian. Maybe we look at From Russia With Love with new eyes in the #MeToo era, or maybe we just love the sight of a tough gal sticking it to Bond, but something about Col. Klebb makes us happy. Somebody in these movies needed to stand up for all the stewardesses Bond yanks into the lavatory.

Author Patricia Highsmith had a thing for gay men. Between Strangers on a Train and her Tom Ripley series, Highsmith seemed fascinated by homoeroticism and power dynamics between men. Matt Damon and Jude Law lean into both elements in The Talented Mr. Ripley, and to great effect. Damon’s Tom Ripley is the kind of character we want to root for, even if he makes us feel guilty for doing so. Besides, he does off more than a few loathsome characters over the course of the film’s runtime, including the slimeball Freddie Miles (Philip Seymour Hoffman). Call that a win for humanity.

Alfred Hitchcock (see above) found one of his most memorable villains in Daphne du Maurier’s novel. And, much as with Rope or North By Northwest, he delights in Mrs. Danvers’ creepiness. As played by Judith Anderson, Mrs. Danvers spends most of Rebecca lurking in the shadows, fussing over the now-dead Rebecca’s underwear and gaslighting the new Mrs. DeWinter (Joan Fontaine). Her underwear fetishism is still weird even by today’s standards. When Danvers coos that she could see through it, we can’t help but wince. And giggle.

If Bela Lugosi and Dracula get all the credit, this sequel doesn’t get enough. Dracula’s Daughter takes an inventive approach to the vampire myth. Rather than retread the original character or story, the movie follows Countess Marya Zaleska (Gloria Holden), the secret daughter of the titular icon. Also unlike her dad, Countess Zaleska doesn’t exactly enjoy her bloodlust. Still, a girl has to eat, and Countess Zaleska begins hunting handsome men and beautiful women to feast upon. It’s easy to read Zaleska’s thirst as a metaphor for queerness, and her shame for her vampirism as internalized homophobia. To us, she’d probably have been much happier embracing her family fangs with a lady friend.

Dr. Pretorius from Bride of Frankenstein

Few classic cinema villains scream “queen” like Dr. Pretorius, the ruthless scientist bent on resurrecting the dead in Bride of Frankenstein. As played by Ernest Thesiger, who was gay in real life, Pretorius yearns to become the “father” of an undead creature. To do so, he must seduce Dr. Frankenstein (Colin Clive) into resuming his experiments. Director James Whale, himself an out-gay in the 1930s, pushed Thesiger to play Pretorius with a camp sensibility, and it shows: he’s one of the most unforgettable characters in the movies, a constant source of menace and humor. We can’t help but love him.

Queer audiences today still often have a hard time swallowing LGBTQ villains, in particular when they’re totally, irredeemably awful. To succeed, a filmmaker must keep the focus on the character’s scheming and let his sexuality be incidental. Director Denis Villeneuve seems to have figured that out in his new version of Dune, which features the villain, Baron Harkonen (Stellan Skarsgård), as a lumbering sociopath who just happens to have a thing for young, pretty men. Contrast that with the 1984 version of the same character: bellowing, femme, predatory, and covered in festering sores. Film historian Robin Wood called the movie the “most homophobic” he’d ever seen.

Thank goodness, then for the 2021 version which features a still-kinda-sorta-probably gay villain, and an intriguing one at that.