TinyMart is sharing this content, the original was posted on lgbtqnation.com by Alex Bollinger, Monday, May 23, 2022, So please click here to go there
.

Republican parents also get upset with teachers who mention their same-sex spouses (but not opposite-sex spouses). 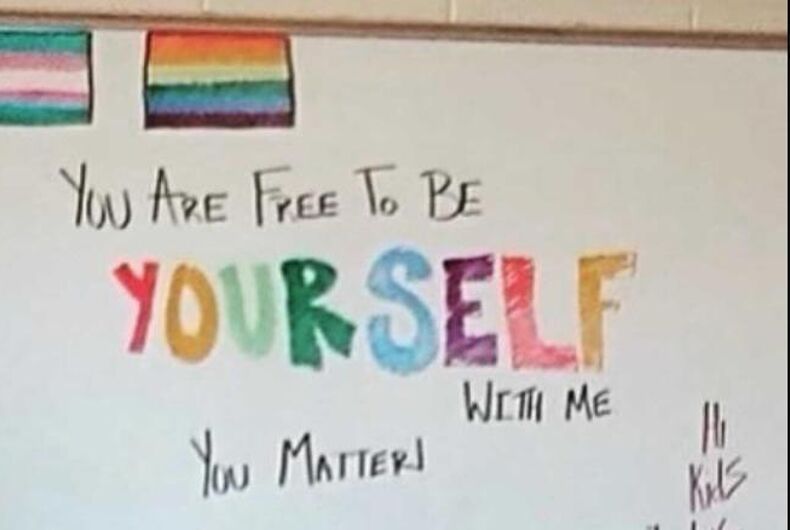 A teacher in Kentucky got violent threats when he wrote an affirming message on his board.Photo: Facebook screenshot

Conservatives have spent the last several months denouncing LGBTQ teachers as “groomers” and pedophiles, with rightwing pundits often saying that they believe that talking to children about LGBTQ issues can turn kids gay.

It turns out that a large number of Republicans believe that teachers can actually make children turn queer.

Related: GOP lawmaker has meltdown in public & screams at voters

40% of Republican adults said that they believe teachers can influence students’ sexuality and gender identity, according to a new Morning Consult poll. Only 27% of Democrats and 29% of independents agreed.

Respondents were more likely in the poll to say that teachers can affect students’ academic performance, social skills, intelligence, values, and even religious views, but the alarmingly large number who believe that sexual orientation and gender identity are learned at school may be why so many Republican parents don’t want LGBTQ people to work with children.

In contrast, 84% of Democratic parents said that they were “comfortable” with LGBTQ people working with their kids and only 10% were “uncomfortable.”

The survey also asked parents if they were comfortable with lessons about “the LGBTQ civil rights movement” being taught in school, and compared that to whether they were comfortable with discussions of “sexual orientation and gender identity.” Florida’s Don’t Say Gay law bans discussions of “sexual orientation and gender identity” in early grades and requires them to be “developmentally appropriate” in older grades – without defining what that means – and many advocates on both sides have taken that language to mean that discussions about LGBTQ people are restricted.

Conservative pundits have been saying that parents, generally, don’t want LGBTQ people mentioned in schools. But it looks like it may just be Republican parents who get upset with teachers who mention their same-sex spouses (but never their opposite-sex spouses).