31 Different Pride Flags and What Each Stands For

TinyMart is sharing this content, the original was posted on marieclaire.com by Katherine J Igoe, 1st April 2022, So please click here to go there
. 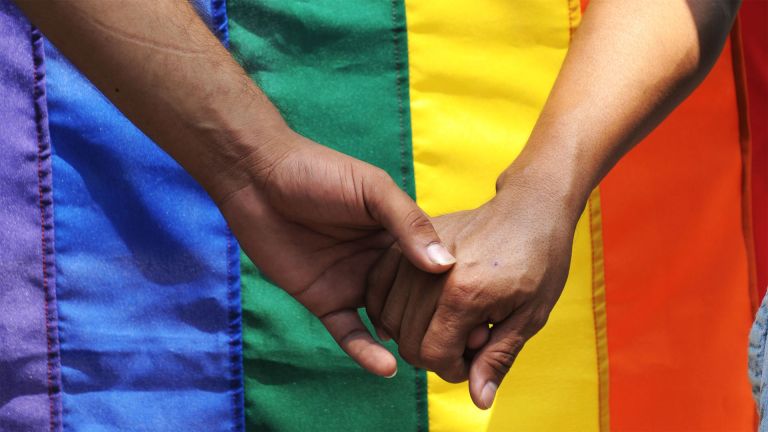 With recent Pride Months conducted virtually, the summer of 2022 will likely see a wealth of in-person Pride parades and events (Pride Month officially occurs in June, but different cities have celebrations during different months). As such, you'll likely see a lot of different Pride flags that embody different aspects of the LGBTQ+ community this year and in future years. So what does each one represent?

This list of 30 Pride flags utilizes information from a range of sources, in particular The Advocate's comprehensive guide—but even outside of this article, there are many more iterations of Pride flags that exist, including flags from different countries and states; flags that include relevant symbols; and two or more flags combined into one. There's also some disagreement about what should be considered the "official" flags, and controversy about some of the flags' origins and meaning. But what's powerful is that the breadth of LGBTQ+ representation continues to evolve, a nod to the diversity of sex, sexuality, attraction, and gender.

Recent Pride events have even more significance in conjunction with BLM protests and activities; You may have seen the hashtag #BlackTransLivesMatter, for instance, or the raised-fist resistance Pride flag (more on that below). In a world in which students are expelled for handing out Pride flags to protest Florida's "Don't Say Gay Bill," the need to show support for LGTBQ+ rights—publicly as well as privately—is as important as ever. Read on to learn more about the flags, their origins, and their meanings.

In 1977, gay politician Harvey Milk tasked veteran Gilbert Baker to come up with a Pride flag. Milk said he felt that queer people "needed something that was positive, that celebrated our love." Inspired by Judy Garland's "Over the Rainbow," each color has symbolism: Hot pink for sex, red for life, orange for healing, yellow for sunlight, green for nature, turquoise for magic/art, indigo for serenity, and violet for spirit.

Milk was assassinated in 1978, and demand for the flag increased as people wanted to show their support. Apparently Baker had trouble getting the pink color, so the flag began selling with seven colors instead.

This is probably the flag you'll see most often: Six colors, apparently easier to produce than the odd-numbered seven (although other reports say it was more about making the flag easier for parades and to hang on posts). The rainbow flag can operate as a general flag for the LGBTQ+ community, but it's not necessarily all-inclusive. Many of the following flags (intersex, asexual, non-binary, etc.) embody different identities that exist within Q (queer) and/or outside this acronym.

Philadelphia added brown and black at the top of their flag in 2017 to spotlight the importance of including queer people of color in the LGBTQ+ community. If the design looks familiar to you...

It's because Lena Waithe donned the colors as a cape at the Met Gala in 2018. "This epic moment of defiance was brought to you by Carolina Herrera," she wrote on Instagram.

As a representation of Queer People of Color, it's not known who the original creator of the flag was but represents solidarity with the BLM movement as well as the intersection of the queer and Black communities (including the importance of figures like Marsha P. Johnson, the Black drag queen who may have thrown the first brick at the Stonewall Inn riots) to the movements. No surprise, the flag has become more popular in 2020 and beyond. The raised fist is a sign of unity and support as well as defiance and resistance, and the various colors on the fist represent diversity. Sometimes called the Resistance Flag, according to Them writer Matt Baume: "The modern LGBTQ+ liberation movement was touched off by queer and trans people of color and their struggle continues to this day, with both communities seeking justice, equality, and freedom from oppression. And because many people belong to both communities, they’re not two distinct causes but instead overlap."

This flag takes inclusion even further, thanks to queer, nonbinary artist Daniel Quasar (xe/they). Their 2019 Kickstarter explained that xe aimed to put more emphasis on the design to deepen its meaning. Brown and black stripes represent people of color and people who have died from AIDS, while the white, pink, and blue (as you'll see later) are colors from the transgender flag. The flag was seen flying over the Massachusetts State House in Boston in honor of the cancelled in-person 2020 Pride Parade.

In 1998, Michael Page wanted to spotlight bisexual people within the LGBTQ+ community. Overlapping over the stereotypical colors for boys (blue) and girls (pink) is lavender—attraction to both sexes. Bisexuality doesn't necessarily JUST mean an attraction to two sexes, and there are other flags to represent attraction to more than one gender (as you'll see).

This flag, for example, represents pansexuality's interest in all genders: Pink for women, blue for men, yellow for "nonbinary and gender-nonconforming people." It was created in 2010 to distinguish pansexuality from bisexuality.

In 2010, the Asexual Visibility and Education Network stated that they wanted to "have a symbol that belongs to all of us." The flag is inspired by their logo; Black represents asexuality, gray for graysexuals (between sexual and asexual) and demisexual (sexual attraction following emotional connection). Purple represents community.

The demisexual flag exists on the asexual spectrum (hence the similar colors in a different configuration), but also has its own separate flag. The term was coined in 2006 on The Asexual Visibility & Education Network (AVEN) by user “sonofzeal” but it's not known who designed the original flag.

This flag isn't widely used—and part of the reason may be that the flag was designed in 1999 by a gay man, Sean Campbell. The Labrys is a double-sided axe apparently used by the Amazonians, and the black triangle was used by the Nazis to identify "antisocial" individuals.

Just as the symbol pi goes on indefinitely after the decimal, there are infinite partners available to those who identify as polyamorous. Gold represents emotional connection, not just sexual love. A modified version was created in 2017 with infinity hearts instead of the pi symbol.

Intersex International Australia designed this flag in 2013 with non-gendered colors "that celebrate living outside the binary." Intersex (variation in sex characteristics) is also represented in the transgender flag (see next slide).

Those who are transitioning or have neutral/no gender are also included in the white. Trans woman Monica Helms designed this in 1999. The blue and pink represent boys and girls, and no matter which way you hold it, the flag is always right-side up.

Another variation on the flag is to include a symbol to represent transgender people (female (♀), male (♂) and Genderqueer (⚨) in a single circle) transposed on top of the five stripes.

This flag was designed to embody all that genderfluidity can contain (since their gender can vary over time): Pink for femininity, blue for masculinity, white for no gender, black for all genders, and purple for the combination between masculine and feminine. JJ Poole created the flag in 2012.

Marilyn Roxie designed the genderqueer flag to represent those identifying outside the gender binary: lavender is androgeny, white is agender, and green is nonbinary. This is also known as the "nonbinary" flag.

Interestingly, this flag is controversial—and now considered outdated in favor of a newer version (next slide). This one was designed by Natalie McCray in 2010 to celebrate lesbian femmes but isn't necessarily loved for its lack of inclusivity.

In 2018, this new version added more colors to celebrate (from top to bottom) gender non-conformity, independence, community, unique relationships to womanhood, serenity and peace, love and sex, and femininity. The debate about representation goes on.

There's also debate over this flag, centered around whether kinks exist within or outside of the LGBTQ+ community. But the "leather flag," created by Tony DeBlase in 1989, is a symbol of that community (which includes many gay men)—black may symbolize leather, white is purity, blue is devotion, and the heart is love.

Craig Byrnes and Paul Witzkoske in 1995 made the "bear flag" for "a subculture of masculine-presenting gay, bisexual and trans men who embrace facial and body hair and may have larger bodies." Each stripe represents the different colors of bears. Thus far, it looks to be the only subculture with its own flag, although there's apparently a "twink flag" used online.

Members of the rubber/latex fetish community have a flag to express their preferences and passion. Peter Tolos and Scott Moats created it in 1995 and say that black represents "our lust for the look and feel for shiny black rubber," red "our blood passion for rubber and rubbermen," and yellow "our drive for intense rubber play and fantasies." Also, there's a kink in it—which totally makes sense, actually.

Polysexual (attracted to multiple but not all genders, unlike pansexual) is still similar to the pansexual flag, with green representing nonconforming genders and pink and blue female and male, respectively. Polysexuality can sometimes be expressed as attraction to masculinity/femininity, not gender. The flag was created on Tumblr in 2012.

Designer Salem X or "Ska" created a reversible flag—much like the transgender flag—to represent rejection of gender. Green is nonbinary, and black and white are absence of gender.

To add to the genderqueer flag's representation, 17-year-old Kye Rowan created the nonbinary flag in 2014 for gender existing outside the binary (symbolized by the yellow). White is all genders, black is no gender, and purple is a mix of genders.

Another fetish flag, the pony play flag was designed in 2007 by Carrie P., and includes black to express unity with the larger leather community.

Sometimes known as the ally pride flag, this is a combination of different symbols—the straight flag is black and white stripes, the traditional pride flag is a rainbow—and the combination is meant to show allyship for the LGBTQ+ community.

The Two-Spirit Pride Flag represents queer Native American individuals as an umbrella term, including traditional and cultural context. Per the University of Northern Colorado, "Two-spirit individuals traditionally were viewed as holding a masculine and feminine spirit. They held a gender identity outside of the binary man or woman." The flag's creation is attributed to Myra Laramee (Cree).

This flag is designed to hold space for people who don't consider themselves cisgender or transgender (whether agender, nonbinary, genderfluid, or identifying in some other way). According to Western Connecticut State University, "There is a varied set of reasons why individuals identify in this way, but there is a real linguistic need to describe this space." It is believed the first metagender flag was created by Tumblr user IMOGA-Pride.

As the LGBTQ+ movement continues to grow in awareness and inclusivity, we may see new flags and symbols. You have the freedom to choose the item you feel represents you. Pride is about appreciating diversity and honoring the past and present of the LGBT community. It's beautiful no matter how you celebrate.