TinyMart is sharing this content, the original was posted on Daniel Villarreal, Thursday, June 2, 2022,

"[Protesting is] a risk that a lot of us are willing to take because we can't continue to work for this company and turn a morally blind eye to its policies," one employee said. 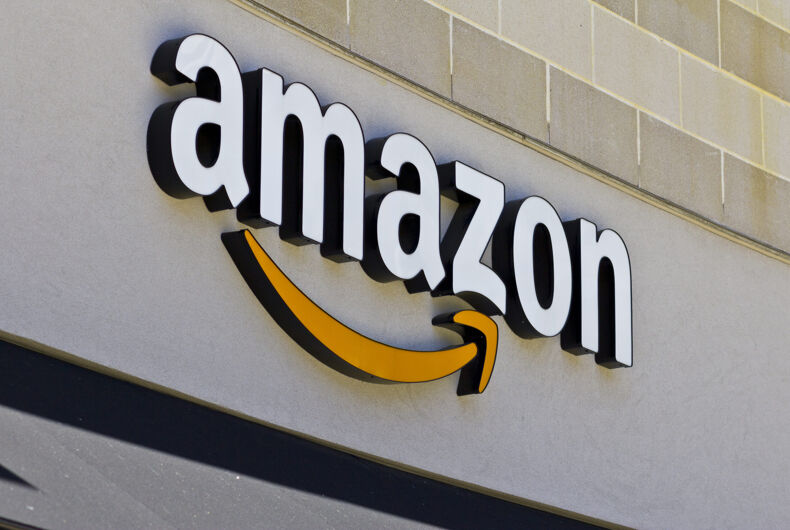 Roughly 30 Amazon employees staged a “die-in” protest during a Pride event at the company’s Seattle campus this past Wednesday. The protesters criticized the retailer’s continued sale of books portraying transgender identity as a dangerous mental illness.

The protest occurred during a ceremony where leaders of the company-sponsored LGBTQ affinity group, Glamazon, sought to raise a rainbow flag in observation of Pride Month.

Members of the employee activist group No Hate at Amazon interrupted the ceremony with a die-in, covering themselves with transgender flags and laying on the ground of a public breezeway between two Amazon buildings, journalist Katherine Long wrote in a tweet thread.

Glamazon leaders tried to end the protest several times before they announced the cancellation of the ceremony, Long wrote.

The die-in highlighted the fact that transphobic views lead to the deaths of trans people, both through anti-trans violence and suicide. Studies have shown that a lack of societal acceptance contributes to high rates of suicide among trans youth.

In particular, the protestors take issue with Amazon’s continued sale of transphobe Abigail Shrier’s 2020 book Irreversible Damage: The Transgender Craze Seducing Our Daughters, a book which claims that trans people are misogynist and mentally ill pedophilic sexual predators who have succumbed to peer pressure.

The protesters say that the books violate Amazon’s ban on books that portray LGBTQ identities as mental illnesses. Some of the protesters wore masks to hide their identities, worried that the company might fire them for their activism.

“[Protesting is] a risk that a lot of us are willing to take because we can’t continue to work for this company and turn a morally blind eye to its policies,” one employee told Insider.

In a statement to LGBTQ Nation, an Amazon spokesperson wrote, “We respect our employees’ right to express themselves without fear of retaliation, intimidation, or harassment,”​ Amazon said in a statement. “As a bookseller, we’ve chosen to offer a very broad range of viewpoints, including books that conflict with our company values and corporate positions. We believe that it’s possible to do both – to offer a broad range of viewpoints in our bookstore, and support diversity, equity, and inclusion.”

In March 2022, Seattle Pride said it wouldn’t allow Amazon to sponsor Pride events because of Amazon’s financial donations to anti-LGBTQ politicians and funding of anti-LGBTQ organizations through the company’s AmazonSmile program.

In 2021, Amazon’s corporate political action committee donated over $460,000 to U.S. politicians who voted against the Equality Act, a bill that would’ve enshrined LGBTQ civil rights into federal law.

In a statement to Insider, Amazon wrote, “We stand together with the LGBTQ+ community, were early and strong supporters of marriage equality, and are working at the U.S. federal and state level on legislation, including supporting passage of the Equality Act. We also work hard to offer an inclusive environment for employees and for five consecutive years we’ve received a perfect score on the Human Rights Campaign’s annual Corporate Equality Index.”